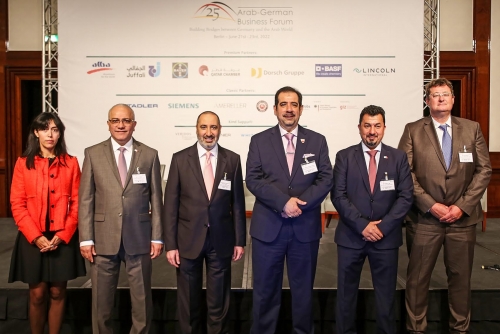 “Five decades and counting, Bahrain has forged closed ties with Germany in the fields of trade and investment, and Alba is a great tangible example of this,” stated Aluminium Bahrain (Alba)’s Chairman of the Board of Directors, Shaikh Daij bin Salman bin Daij Al Khalifa during his Keynote Speech at the Gala Dinner of the 25th Arab-German Business Forum that is being held in Berlin from 21 to 23 June 2022.

Alba will play a key role in the development of the planned Aluminium Downstream Park and look forward to being the supplier of choice for all Aluminium manufacturing and recycling projects.” The Arab-German Business Forum comprises panel discussions and roundtables with the participation of high-level delegates and speakers who focus on creating opportunities and growth within key sectors of the Arab economies as well as Germany.

Alba’s Chief Executive Officer Ali Al Baqali participated in the Panel Discussion on ‘Sustainability and Waste Management: Major Challenges and Excellent Opportunities’ during which he gave insights on Alba’s fully-fledged ESG Roadmap, which is in line with Bahrain’s commitment to achieve ‘Net Zero Emissions’ by 2060.

During his participation in the Panel discussion on ‘Mobility and Logistics: Smart Solutions as a Key to a Sustainable Development?’, Alba’s Chief Marketing Officer Khalid A. Latif stated, “Alba has always been ahead of the curve when it comes to producing and delivering Aluminium responsibly and sustainably.

Our recent credentials including ASI Performance Certification give the Company a competitive edge as we seek to embark on new markets in Germany and Europe.” On the side-line of the Arab-German Business Forum 2022, the Chairman of the Board Shaikh Daij bin Salman bin Daij Al Khalifa presented Alba’s 50th Anniversary Coin to Abdulla Abdullatif Al-Shaikh Abdulla, the Ambassador of Bahrain to Germany, as well as to AbdulAziz Al Mikhlafi, the Secretary-General Ghorfa Arab-German Chamber of Commerce and Industry.