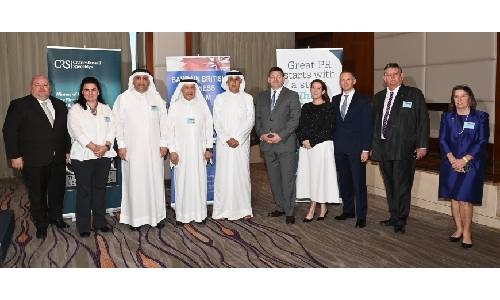 The United Kingdom had been a top investment partner of Bahrain on a global scale for more than 200 years, said Zayed R. Alzayani, the Minister of Industry and Commerce He also revealed that the growth in trade volume between both countries is witnessing remarkable development in various sectors, reflecting the significance of the distinguished historical relations between both countries.

This came as the minister was at a luncheon organised by the Bahrain British Business Forum. British Ambassador to Bahrain, Roderick Drummond, and Khalid bin Rashid Alzayani, the Chairman of the Board of Directors of the Forum and a number of officials and stakeholders were present.

The meeting discussed several topics and upcoming projects by both countries at the Diplomat Hotel - Bahrain. The minister presented a number of vital topics, including the results of the meetings between the UK-Bahrain Joint Working Group, including the FTA between the GCC and the UK, which would promote trade in goods, services and other areas that benefit the public and private.

The minister also pointed out Bahrain’s launch of a new 10-year golden residence visa (golden visa), providing expatriates and foreign investors with the opportunity to stay in the country permanently.

He also presented the new SIJILAT 3.0 update, an advanced electronic system highly qualified in the registration and licensing of businesses in Bahrain and fully connected to all electronic systems of the relevant government entities.