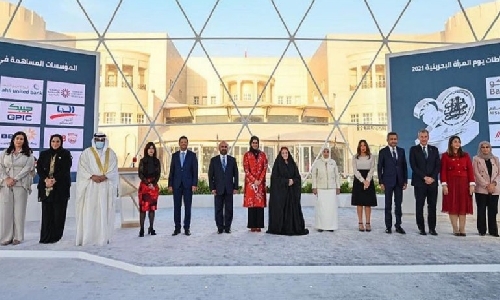 Al Salam Bank announced its sponsorship of the event held in celebration of Bahraini Women’s Day under the slogan “Bahraini Women in National Development ...

A Journey of Advancement in a Giving Country,” coinciding with the 20th anniversary of the Supreme Council for Women’s establishment.

During the event, Her Royal Highness Princess Sabeeka bint Ibrahim Al Khalifa, Wife of His Majesty the King and President of the Supreme Council for Women, inaugurated the Bahraini Women’s Monument “Impact” or “Athar”, followed by an introductory film to showcase the most important objectives of this edifice.

The council also issued a documentary book to celebrate this prestigious occasion, accompanied by a brief visual presentation, and a documentary film entitled “The Supreme Council for Women After Twenty Year ...

Recommendations: From Implementation to Measuring Impact.”

Government entities and official sponsors who supported the activities hosted in celebration of Bahraini Women’s Day 2021 were also honoured during the event.