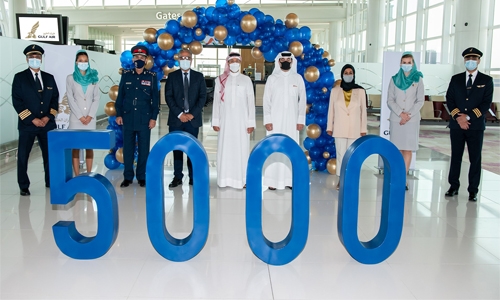 Gulf Air, the national carrier of Bahrain, celebrated yesterday its 5000th departure from Bahrain International Airport’s new terminal, which the Acting Chief Executive Officer of Gulf Air described as a “testament to our boutique strategy and our growing airline!” Gulf Air reached the operational milestone when flight GF003 took off from Bahrain to London Heathrow.

“When we moved to the new airport back in January 2021, we knew it would be a new beginning and new chapter in the Kingdom’s journey in aviation history,” said Captain Waleed AlAlawi.

The move, he said, strengthened the Kingdom’s position as a hub to facilitate the movement of millions of passengers. He added: “The state-of-the-art facilities and the varied options of entertainment for every type of passenger make the new terminal a great place to start and end a journey.”

To commemorate the occasion, Gulf Air organised a small event at the departure gate of the flight. Gulf Air’s executive management and officials from Bahrain International Airport, Bahrain Airport Services, Bahrain’s Civil Aviation Affairs and the Ministry of Interior were present. The airline also presented passengers of the flight with special commemorative giveaways marking the 5000th departure.