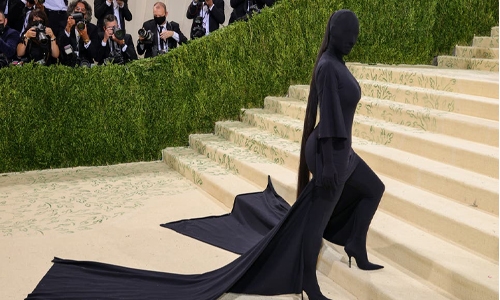 Kim Kardashian always manages to make heads turn with her style at Met Gala. Each year, Kim's outfit is one of the most talked-about outfits on the red carpet. This year was no different. But unlike previous years, Kim's all-black outfit by Balenciaga received more flak than appreciation.

Kim came dressed head to toe in a black Balenciaga outfit which even covered her face.

While some on Twitter felt Kim was raising awareness around the plight of women in Afghanistan and other Islamist countries, there were others who found her outfit mocking those who have been forced to wear a burqa.

Another argument that has been doing the rounds on Twitter regarding the outfit was surrounding the double standards of fashion.

‘It’s oppression in the East and somehow ‘fashion’ in the West?’ argued one user.

"In Afghanistan, women are forced to cover up by the taliban, I think @KimKardashian has bad taste generally. But this really is bad taste," wrote another user.

The theme at the gala this year was 'In America: A Lexicon of Fashion' and Kim explained her outfits choice on Instagram recently.

She took to her Instagram account to defend her look which successfully bewildered many people.
Alongside a picture of her attending the Monday event, the 40-year-old celeb wrote in the caption: "What`s more American than a T-shirt head to toe?!"

"How you the most talked about person at an event and nobody can even see you? THATS LEGENDARY," one user wrote.
"I will never understand this look," another added.