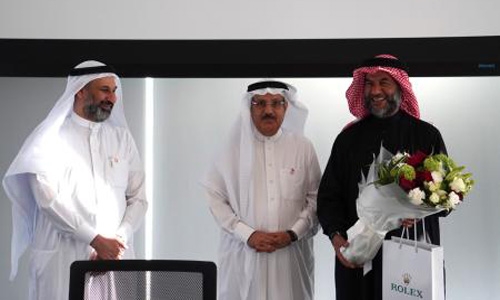 Shehab has served in his current role as Head of Operations & Administration at the Group head office since May 2006, where he oversaw the Group’s most critical operations and management processes.

A farewell event was held in the Group Headquarters at Al Baraka Towers on 30th December 2020 with key employees and Executive Management of Al Baraka Banking Group in Shaikh Saleh Kamel Hall. All of the staff members got to view the ceremony virtually.

The President & Chief Executive of Al Baraka Banking Group, Adnan Ahmed Yousif, said, “During Abdulrahman’s tenure as the Head of Operations & Administration, he played a very crucial role in helping the Group adapt to significant changes in process control, governance of the Units and firm leadership. The entire Operations control at the Head Office, which included Back Office Operations, IT Department, Human Resource, Investors Relations, Corporate Communications, Branding and PR, were under his direct control”.

Yousif added, “In the process, Shehab served as a champion for establishing new systems and procedures which were adopted throughout the Group and thus contributed significantly to our robust governance structure. He played a very important role in the establishment of both Al Baraka Bank Syria and Bank Al Tamweel wa Al Inma (BTI Bank) Morocco”.

In his farewell speech, Abdulrahman Shehab said, “This is a most emotional moment for me as I bid farewell to this large family of Al Baraka members who has all become my very own family over the years. Not only in Bahrain but also across the 17 countries spanning the globe, I have come to marvel at the oneness and the spirit of camaraderie that exists in the Group.”