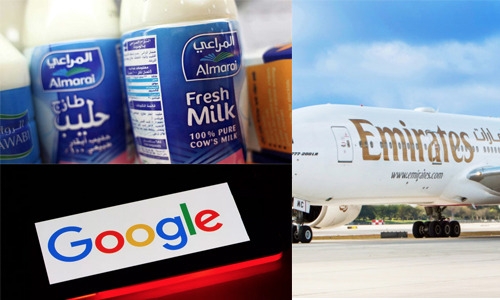 The rankings were based on the Index score from YouGov BrandIndex, which is a measure of overall brand health calculated by taking the average of Impression, Quality, Value, Satisfaction, Recommend and Reputation1.

Despite the flight restrictions in place, perceptions of leading carrier brands have remained strong in the UAE and KSA. Emirates remains the top-ranked brand in the UAE scoring 59.9 points (with a marginal decline in its year-on-year brand health score), while Saudia has made a notable improvement to its brand perception, climbing up three places to come third in KSA’s list of top 10 brands (47.5). 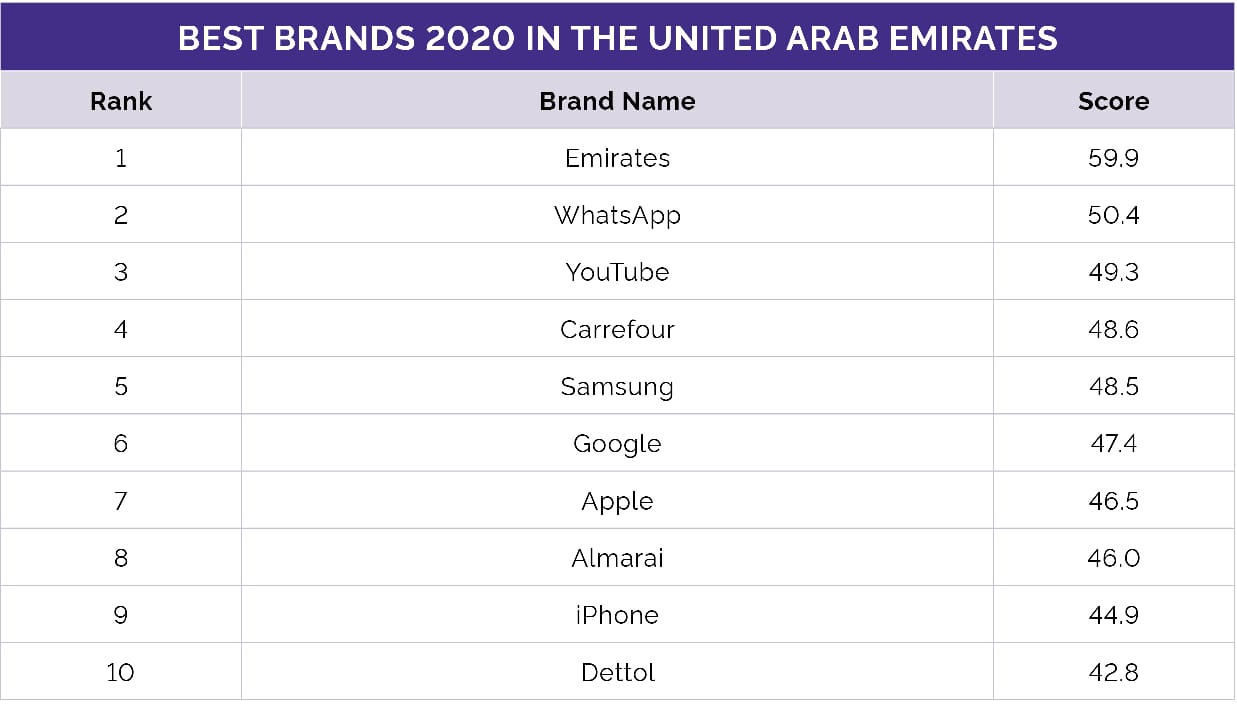 Technology giants Google, WhatsApp and YouTube make an appearance in the Top 10 brands list of all three countries. YouTube has made a significant improvement to its brand perception among UAE residents and has jumped ahead three places to become the third most popular brand in the country (49.3). Google (47.4) and WhatsApp (50.4) on the other hand, did not register any change to their brand perception over the past year.

In KSA, YouTube (43.4), WhatsApp (41.7) and Google’s (41.7) year-on-year brand health scores did not witness much change. Although in Egypt, all three brands noted a decline in their scores. 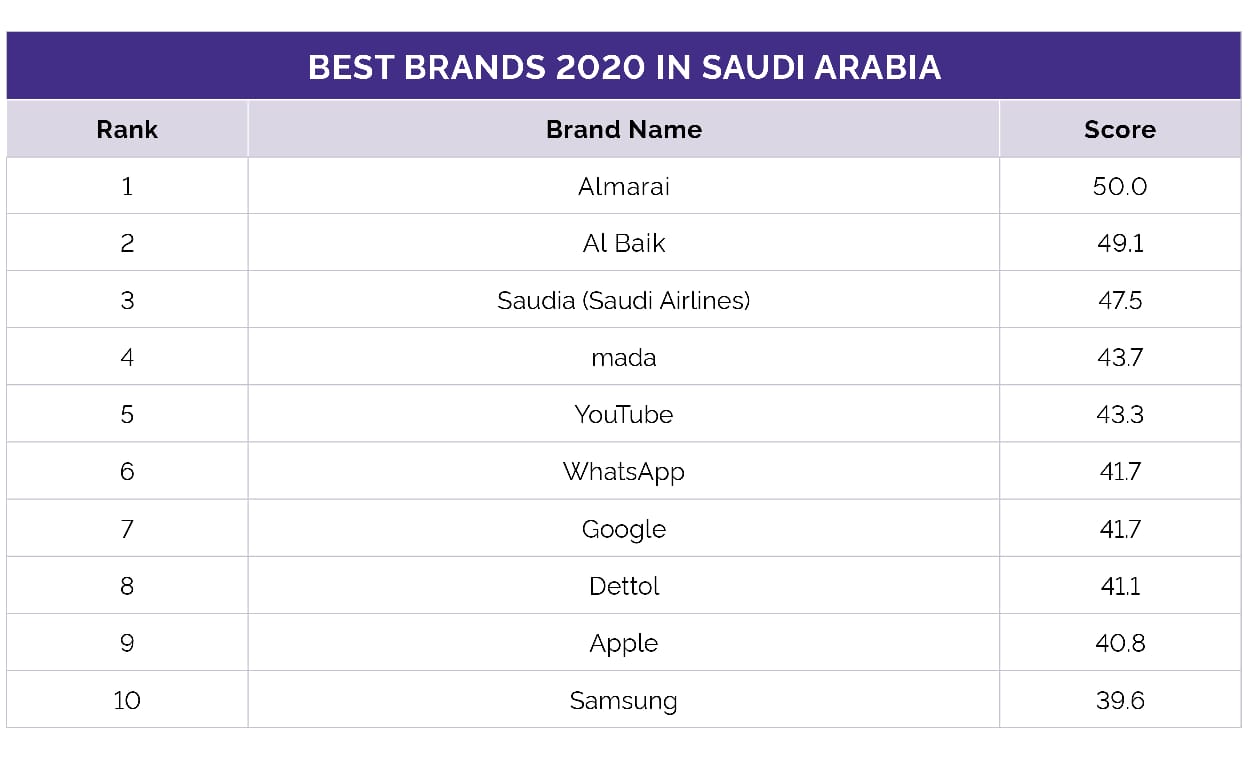 Within the region, Dettol had a very strong year amidst the pandemic in terms of brand health. In the UAE, Dettol made a new entry in tenth (score) with a significant 5.6-point uplift in its score. In Egypt and KSA, it has moved up one and two places in the rankings, to seventh (38.4) and eighth (41.1), respectively.

Carrefour has consolidated its position in both UAE and Egypt. In the UAE, it remains in fourth this year scoring 48.6 (with an improved year-on-year score), and in Egypt, it has made an impressive new entry into the list in the sixth position (42.5).

Samsung has re-entered Saudi’s top ten list in tenth (39.6), while Dream Park and National Bank of Egypt are new entrants in Egypt’s list of top 10 brands- placed in eighth (37.6) and ninth (37.4) respectively. 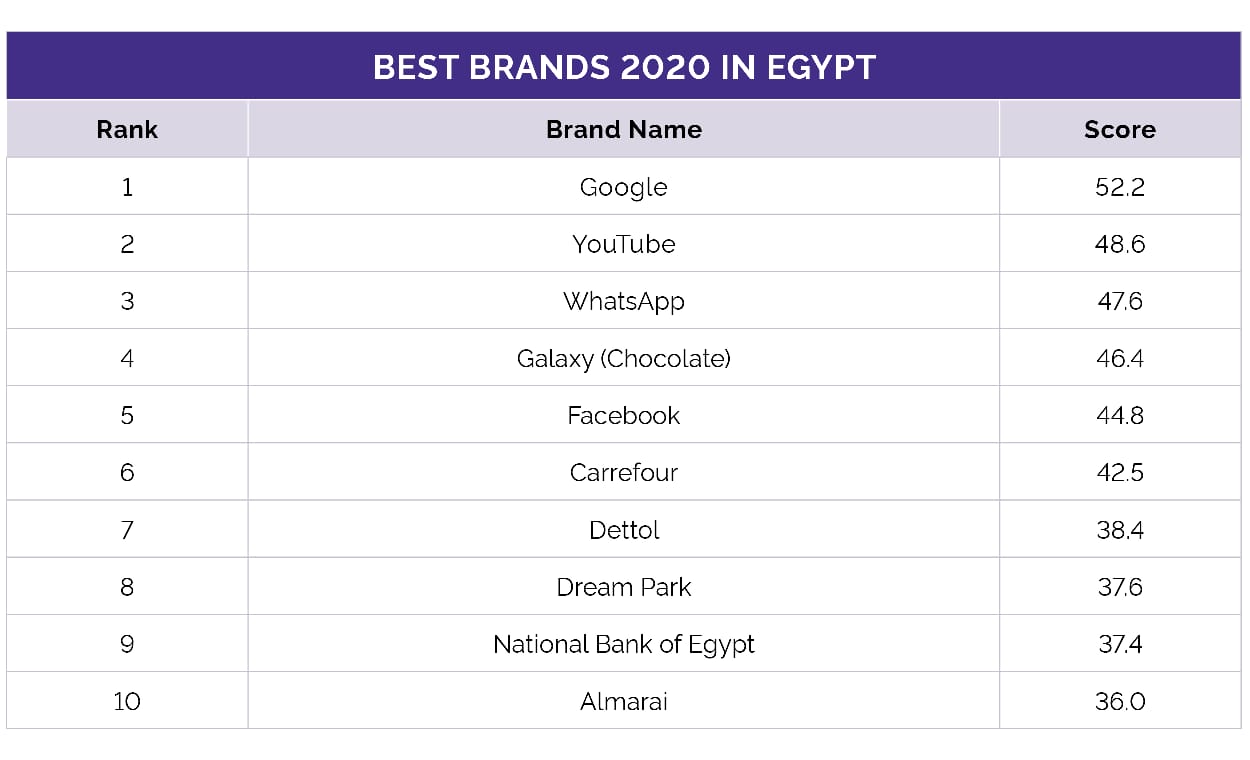 The rankings also show the brands which have improved the most over the past 12 months.  Majid Al Futtaim is the most improved brand in the UAE, with a change in score of +11.0. It also appears in Saudi’s list of improved in the second place, with an enhancement of +6.2 to its score.

In KSA and Egypt, STC Saudi Telecom and KFC are the most improved brands, with a change in score of +8.4 and +9.4, respectively.

E-commerce giant noon.com appears in the improvers list of all three countries, displaying the strength of the regional ecommerce ecosystem during the challenging past year. In both UAE and KSA, noon.com is the third most improved brand, while in Egypt it ranks eighth (5.5) in the list of improvers.

The improvers list of MENA this year has a dominance of Food & Beverage brands, highlighting the role of familiar consumer brands in comforting residents during the ongoing health crisis.