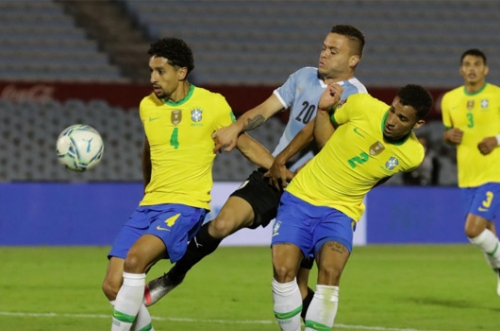 First-half goals from Arthur and Richarlison gave Brazil a 2-0 win away at Uruguay on Tuesday and maintained their 100% record in the South American World Cup qualifiers for Qatar 2022.

Brazil was missing a host of players through COVID-19 and injury, including talismanic striker Neymar, but they were too strong for their opponents, who have not beaten them since 2001.

Arthur got the opener after 34 minutes when his shot from outside the box was cruelly deflected past Uruguayan keeper Martin Campana and then Richarlison glanced a header into the net from a short corner seconds before half time.

Missing Luis Suarez after he tested positive for COVID-19, Uruguay hit the woodwork twice in the first half but their unlucky night was confirmed when the Video Assistant Referee convinced the officials to send off Edinson Cavani for a mistimed tackle on Richarlison at 71 minutes.

Uruguay kept battling and Martin Caceres saw his close shot hit the net with a quarter of an hour left only to be disallowed by the Chilean referee.

The win in Montevideo was Brazil’s fourth in a row in the qualifying stage and ensures they are the only side in the 10-team South American group to have won all of their opening matches.

The qualifiers will restart again in March 2021.

The top four teams in the group qualify automatically for Qatar 2022 and the fifth-placed side goes into an inter-regional playoff.

In the day’s earlier games, six different players got their name on the scoresheet for Ecuador as they dealt Colombia their second successive heavy defeat, crushing their neighbours 6-1 in Quito.

Ecuador, who missed out on Russia 2018, scored four times in the first half and although James Rodriguez got one back from the penalty spot on the stroke of halftime, the home side added another two in the second period.

In Caracas, Venezuela picked up their first points thanks to a late Salomon Rondon winner against Chile.

Guillermo Maripan put the home side ahead after eight minutes and although Arturo Vidal got his third goal in two games moments later Rondon’s 81st-minute strike gave Venezuela a much-needed win.