Japan to boost stimulus to $1.1 trillion | THE DAILY TRIBUNE | KINGDOM OF BAHRAIN 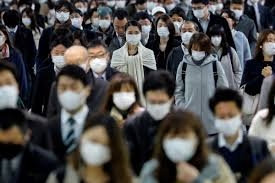 Japan boosted its new economic stimulus package yesterday to a record $1.1 trillion to expand cash payouts to its citizens, as the fallout from the coronavirus pandemic threatens to push the world’s third-largest economy deeper into recession.

Prime Minister Shinzo Abe formally decided the new stimulus less than two weeks after his cabinet approved an earlier plan to spend 108.2 trillion yen ($1 trillion), which had detailed payouts of 300,000 yen to households with sharp drops in income.

Abe has caved in to pressure from within his own ruling bloc to boost the help with a payment of 100,000 yen for every citizen, instead of 300,000 yen for a limited number of households, analysts say, casting doubt about his leadership amid falling support.

The new amount triples the cost from what the government had originally planned to 12 trillion yen. “I understand the 100,000 yen payout scheme was decided with the aim of encouraging every citizen to help with each other to overcome this crisis as one,” Finance Minister Taro Aso said.

Corona deaths in Switzerland 1187, and figures indicate a decline in injuries