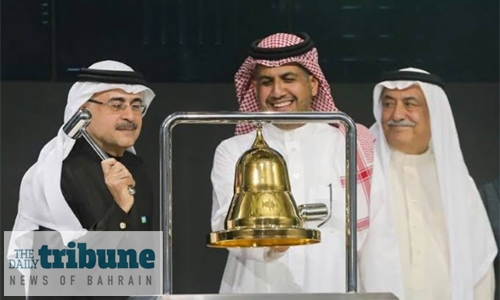 Energy giant Saudi Aramco’s market value soared above $2 trillion yesterday as its share price surged again on its second day of trading. The valuation milestone was sought by Saudi Crown Prince Mohammed bin Salman when he first floated the idea of selling up to five percent of Aramco, the world’s largest oil firm, about four years ago.

Aramco shares jumped another 9.7 per cent to 38.60 riyals ($10.3) yesterday morning, following a 10-percent rise the previous day. That boosted the company’s valuation to $2.06 trillion and pushed the Saudi Stock Exchange’s capitalisation up to $2.56 trillion, making it the seventh largest bourse in the world ahead of the Canadian, German and Indian markets.

Since its trading debut on Wednesday, Aramco’s share price has already soared 20.6pc from the 32 riyals ($8.53) that the stock was sold for in the record-breaking initial public offering. The share price fluctuated sharply in the first hour of trading yesterday before steadying above 38 riyals a share. Shares on the kingdom’s Tadawul stock exchange, which closes at 1200 GMT, are allowed to fluctuate by a maximum of 10pc each day.

Tadawul witnessed one of its most hectic trading sessions on Thursday, with some 200 million Aramco shares -- worth more than $2 billion -- changing hands. Thursday is the last weekly trading day in Muslim Saudi Arabia. Trading resumes on Sunday. Aramco’s stock sale is the cornerstone of Prince Mohammed’s ambitious strategy to overhaul the oil-reliant economy by raising funds to pour into megaprojects and non-energy industries such as tourism and entertainment.

To lure investors to subscribe to its IPO, Aramco guaranteed that it will distribute dividends of at least $75 billion a year until 2024. The $25.6 billion proceeds from the Aramco IPO are expected to be channelled into the coffers of the Public Investment Fund, the Saudi sovereign wealth fund, which will invest it in mega projects.

Aramco opened its accounts this year and announced that it posted $111 billion in net profit in 2018, making it the most profitable company in the world.