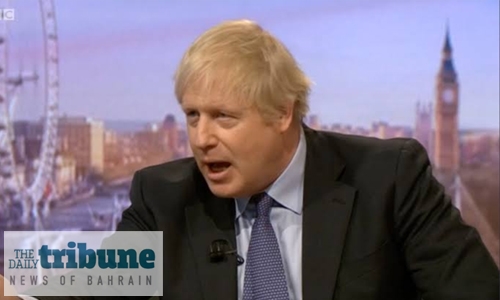 Boris Johnson came under fire yesterday for failing to face one of Britain’s top political interviewers as he prepared for a final head-to-head debate with the main opposition leader before next week’s election. Four other major party leaders have subjected themselves to an uncomfortable grilling from the BBC’s Andrew Neil but the prime minister has so far declined to do so.

The spat comes before the second and final televised showdown between Conservative party leader Johnson and Jeremy Corbyn, of the main opposition Labour party, at 8:30 pm (2030 GMT). Neil, a former editor of the Sunday Times, said he wanted to put questions of trust to Johnson. After quizzing Brexit Party leader Nigel Farage on Thursday night, Neil told viewers the series of 30-minute leaders’ interviews was done “on your behalf to scrutinise and hold to account those who would govern us.

That is democracy. “We’ve always proceeded in good faith that the leaders would participate. And in every election they have. All of them. Until this one.” Corbyn meanwhile claimed in a speech in north London on Friday that he had uncovered confidential documents proving Johnson was “deliberately misleading the people” about his Brexit deal. He said the government papers suggested there would be customs declarations and security checks between mainland Britain and Northern Ireland, contrary to what he had claimed.

“This is the cold, hard evidence that categorically shows the impact Johnson’s damaging Brexit deal will have on large parts of our country,” the veteran socialist said. “This drives a coach and horses through Boris Johnson’s claim that there will be no border in the Irish Sea. “Ask yourself: if they hid this report what else are they hiding? How will they sell you out?” Corbyn has previously accused Johnson of cooking up a secret deal with US President Donald Trump to sell off the state-run National Health Service.

Both Trump and Johnson deny the claim. Johnson called the snap election to try to get a parliamentary majority which would enable him to secure backing for his deal for Britain to leave the European Union. With less than a week to go until voting next Thursday, the Britain Elects poll aggregator puts the Tories on 42 per cent, Labour on 33pc, the Liberal Democrats on 13pc. The Green Party and arch-eurosceptic Brexit Party were both on three percent.

Former prime ministers Tony Blair and John Major were meanwhile set to intervene in the campaign to call for a second referendum on Brexit. Conservative premier Major (1990-1997) and Labour ex-PM Blair (1997-2007) were expected to make statements to a “Final Say” rally for another referendum later on Friday. Both want Britain to remain in the EU.