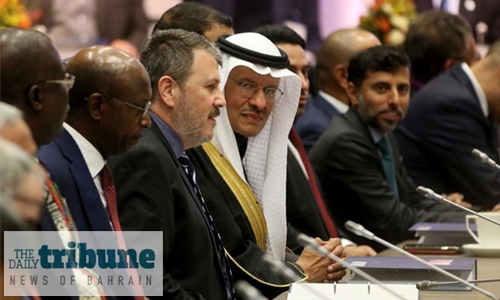 Oil prices dipped yesterday but were on track for weekly gains as a meeting of OPEC and its allies agreed to more output cuts in early 2020. The Organisation of the Petroleum Exporting Countries (OPEC) and allies including Russia - a grouping known as OPEC+ - agreed yesterday to more output cuts to avert oversupply as economic growth stagnates amid the US-China trade war, sources said.

The cuts are expected to last until March. Brent futures LCOc1 were down 20 cents at $63.19 by 1202 GMT but are on track to rise over 1pc on the week. West Texas Intermediate oil futures CLc1 fell 33 cents to $58.10 a barrel. They are set to rise over 5pc on the week. The cuts next year will expand the existing agreement by an extra 500,000 barrels per day (bpd) reduction in the first quarter next year, through tighter compliance and some adjustments.

OPEC’s current agreement is a supply cut of 1.2 million bpd and the increased amount represents about 1.7pc of global oil output. [nL8N28F2FX] “If we were to have an outcome of an extension of cuts with only the official quota of the OPEC+ group being reviewed lower (the 500,000 bpd), rather than actual production, then the change in supply policy would be cosmetic (given below target production in some countries, notably Saudi Arabia and Angola),” said Harry Tchilinguirian, global oil strategist at BNP Paribas.

OPEC is likely to shoulder 340,000 bpd in fresh cuts and non-OPEC producers an extra 160,000 bpd, one source said yesterday. Any price gains from the OPEC+ output cut are likely to benefit American producers not party to any supply curbing agreement. American drillers have been breaking production records even as they cut the number of oil rigs in operation, filling gaps in global supplies.

“North American shale supply will continue growing even in an environment with lower oil prices,” Rystad Energy said in a note. Higher oil prices are also supporting the initial public offering of Saudi Arabia’s stateowned oil company, Saudi Aramco, which priced its shares on Thursday at the top of an indicated range.