Bahrain will protect rights of all workers: Labour Minister | THE DAILY TRIBUNE | KINGDOM OF BAHRAIN 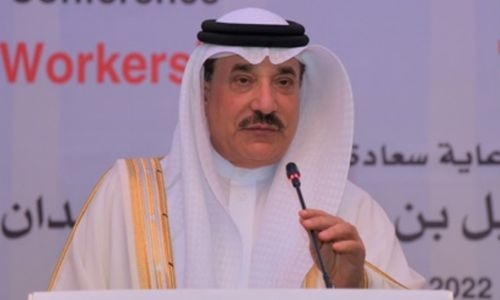 Bahrain will protect rights of all workers: Labour Minister

Also Board of Directors Chairman of the Labour Market Regulatory Authority (LMRA), Humaidan said it is based on the system of humanitarian values spearheaded by His Majesty King Hamad bin Isa Al Khalifa, and supported by His Royal Highness Prince Salman bin Hamad Al Khalifa, the Crown Prince and Prime Minister.

The Minister was speaking as he inaugurated yesterday the fifth regional “Social Protection for Domestic Workers” conference, organised by the General Federation OF Bahrain Trade Unions (GFBTU) on October 25-26.

Addressing the opening ceremony of the event, he emphasised that the leadership’s support has resulted in strengthening the foundations and principles of improving working conditions for all workers and preserving their rights without discrimination, which contributed to placing Bahrain among developed countries in providing fair and equitable guarantees for workers, earning it a prestigious status at all international labour gatherings.

Humaidan affirmed that the Kingdom has issued innumerable laws, procedures and regulations that provide protection for all.

He also highlighted the measures taken by the LMRA to ensure protection for all expatriate workers, including domestic helpers.

The conference aims to shed light on national legislation and laws related to expatriate domestic workers to enhance cooperation mechanisms between labour organisations in Asia, Africa and the Gulf Cooperation Council (GCC) countries, and to ensure that domestic workers enjoy the same rights enjoyed by their counterparts in other sectors.