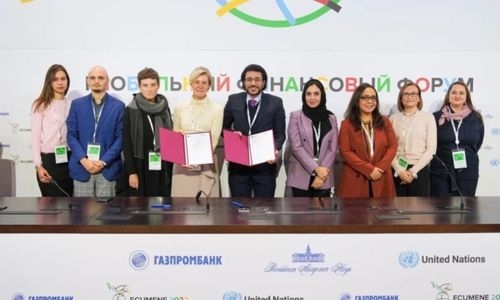 The Bahrain Centre for Strategic, International and Energy Studies (Derasat) signed a Memorandum of Understanding with the International and Comparative Law Research Centre in Moscow, as part of Derasat’s efforts to expand its research partnerships with various think tanks around the world.

The agreement was signed on the sidelines of Derasat’s delegation’s participation in the 2022 Ecumene Global Financial Forum held from 28 to 30 September.

Present during the signing ceremony were Shaikha Nayla bint Ali Al-Khalifa, Director of Communications and Knowledge Management, and Ejlal Essa Bubshait, Director of Opinion Polls and Surveys at Derasat.