Russia defends war in Ukraine as US, others call for accountability at UN | THE DAILY TRIBUNE | KINGDOM OF BAHRAIN 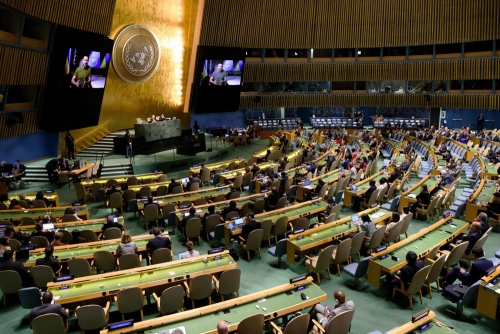 World leaders at the United Nations yesterday called for Moscow to be held accountable for human rights violations in Ukraine as Russian Foreign Minister Sergei Lavrov defended Moscow’s war and accused its neighbor of committing atrocities.

Addressing a meeting of the UN Security Council on atrocities committed in Ukraine since Russia’s Feb. 24 invasion, Lavrov accused Ukraine of creating threats against Russian security and “brazenly trampling” the rights of Russians and Russian-speakers in Ukraine.

“I can assure you that we will never accept this,” said Lavrov, who came to the council chamber to speak and then left. “Everything I’ve said today simply confirms that the decision to conduct the special military operation was inevitable.”

He said countries supplying weapons to Ukraine and training its soldiers were parties to the conflict, adding that “the intentional fomenting of this conflict by the collective West remained unpunished.” US Secretary of State Antony Blinken pledged that Washington would continue to support Ukraine to defend itself.

“The very international order we’ve gathered here to uphold is being shredded before our eyes. We can’t let President Putin get away with it,” Blinken told the council.