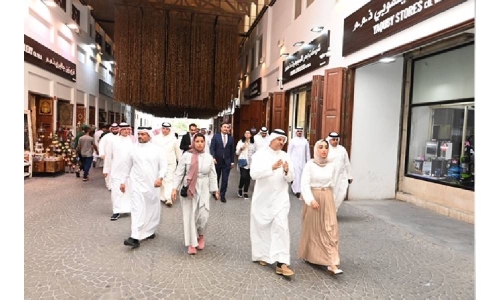 Tourism Minister Fatima bint Jafar Al Sairafi has pointed out the key role of cultural tourism as a pillar in Bahrain’s tour strategy 2022-2026. The Minister noted Bahrain’s rich heritage which has to be projected worldwide, stressing the importance of the old Manama Souq as a historical destination for the world.

This came following Al Sairafi visit, along with Bahrain Authority for Culture and Antiquities President Shaikh Khalifa bin Ahmed bin Abdullah Al Khalifa to Manama historical city and the old souq to get updated about the facelift project of the old Manama Souq which is overseen by BACA.

The development project aims to recover the cultural identity and status of the souq, being one of the oldest in the Arabian Gulf region. Al Sairafi stressed keenness on availing of the civilisational heritage of the Kingdom to promote cultural tourism and enhance its contribution to the national economy.

Shaikh Khalifa bin Ahmed affirmed the great care given to the historical Manama city which has been listed on UNESCO’s preparatory list since 2018. He pointed out that the old Manama Souq represents a deep cultural infrastructure for cultural tourism, stressing that developing it will further confirm the specificity of the historical city regarding cultural and religious diversity.