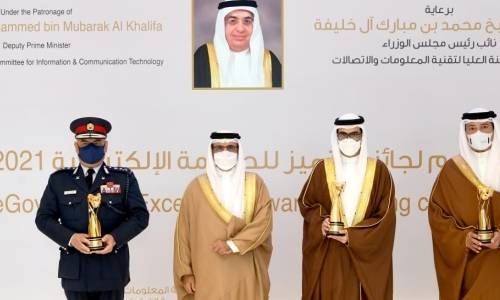 Interior Minister, General Shaikh Rashid bin Abdullah Al Khalifa, has extended thanks and gratitude to His Majesty King Hamad bin Isa Al Khalifa, and His Royal Highness Prince Salman bin Hamad Al Khalifa, the Crown Prince and Prime Minister, for the support and care provided to the Interior Ministry through all its security and services sectors, which contributed to the remarkable performance development and excellence in providing advanced and comprehensive security services.

The Interior Minister hailed the winning of the Operations Directorate of the Public Security Presidency, Southern Governorate and the Customs Affairs of the eGovernment Excellence Awards of 2021. The winning translates the Interior Ministry’s plans to utilise modern technologies to meet the inspirations of the government and the Bahrain Economic Vision 2030 and support the information technology and telecommunication sectors.

The Interior Minister congratulated the three winners, valuing their remarkable services despite the extraordinary situation and challenges of COVID-19. He asserted that the winning reflects the creative efforts of the Interior Ministry’s affiliates, along with their capabilities and potentials to achieve excellence.

He also expressed thanks and appreciation to His Highness Shaikh Mohammed bin Mubarak Al Khalifa, Deputy Prime Minister and Chairman of the Supreme Committee for Information and Communication Technology, for patronising the honouring ceremony of the 11th edition of the award. Furthermore, he hailed the efforts of the Information and eGovernment Authority (iGA), led by Mohammed Ali Al Qaed. The award asserts the dedication of Bahrain to adopt national initiatives to promote competitiveness and accomplishments in digital transformation and the adoption of technology, he added.

The minister concluded by highlighting that the award was one of the initiatives that contribute to achieving visions and inspirations and reflect the national competencies and potentials to turn the COVID-19-related challenges to success stories through technology-based projects. He expressed appreciation to all associated organisations and individuals.

The Operations Directorate won for the best-integrated services for individuals or businesses through the geo-security system. The Southern Governorate won the award for the best practices in e-community interaction for its virtual Majlis. Customs Affairs won the best e-proposal “Gov4Good” by Customs Affairs’ affiliate Shaikha Muneera bint Mohammed Al Khalifa. Gov4Good is a government platform to solve problems through innovative solutions.