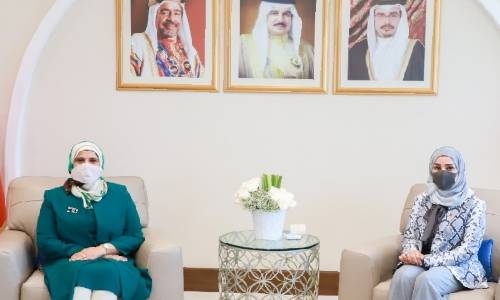 Speaker of the Council of Representatives, Fawziya bint Abdulla Zainal, has asserted that Bahrain has set the example in the field of higher education thanks to the constant support of His Majesty King Hamad bin Isa Al Khalifa to education, enabling the kingdom to attain distinguished achievements in the fields of higher education, gender balance and women’s access to higher posts.

The speaker expressed deep pride in the efforts being exerted by the government, led by His Royal Highness Prince Salman bin Hamad Al Khalifa, the Crown Prince and Prime Minister, to achieve comprehensive development in the field of education, making the kingdom an advanced model for education and a developed civilisational and scientific centre.

Zainal made the statements while receiving here today the University of Bahrain (UoB) President, Dr. Jawaher Shaheen Al-Mudhahki, and praised HM the King’s precious trust in her through appointing her to her post, wishing her every success.

The speaker affirmed the Bahraini women’s distinguished status and ability to contribute to the comprehensive development march, under the leadership of HM King Hamad, the first supporter of Bahraini women's advancement.

Speaker Zainal commended the success of the National Gender Balance Model, launched by the Supreme Council for Women (SCW), led by Her Royal Highness Princess Sabeeka bint Ibrahim Al Khalifa, Wife of HM the King, in paving the way for achieving gender balance across various fields.

UoB President expressed thanks and appreciation to the Speaker for the meeting, stressing UoB’s continuous cooperation and coordination with the Council of Representatives in order to achieve the kingdom’s development goals and aspirations for a brighter future.