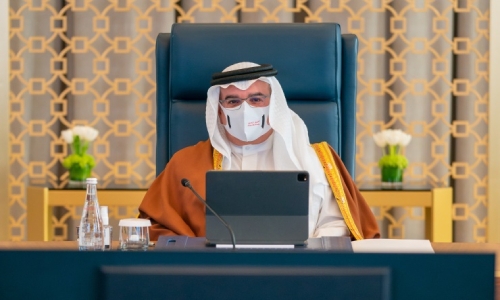 The Cabinet directed government agencies to follow up on the recommendations in the National Audit Office (NAO) Annual Report 2020-2021 and take the necessary measures to develop the management of public funds as well as their administrative and financial performance.

The Cabinet decided to refer the report to the Government Executive Committee to supervise the application of the recommendations contained therein in accordance with the mechanism followed during the review of previous reports of the NAO.

The Cabinet expressed its thanks to all ministries and government agencies that did not draw any substantive observations in this year's report, highlighting the role played by the NAO in strengthening governance to achieve correct practices in this field.

The Cabinet announced that the Kingdom of Bahrain aims to reach net zero emissions by the year 2060 in order to face the challenges of climate change and protect the environment.

The Cabinet welcomed the launch of the Kingdom of Saudi Arabia’s first package of “Green Saudi Arabia” initiatives, under the leadership of the Custodian of the Two Holy Mosques, King Salman bin Abdulaziz Al-Saud. In addition to the announcement made by HRH Prince Mohammad bin Salman bin Abdulaziz Al Saud, Crown Prince, Deputy Prime Minister and Minister of Defense that Saudi Arabia will reduce reach net zero emissions by the year 2060 through a circular carbon economy approach.

The Cabinet stressed the importance of these initiatives and their objectives in protecting the environment and facing the challenges of climate change.

1 - A memorandum by the Ministerial Committee for Legal and Legislative Affairs regarding several MoUs and an execution plan between the Kingdom of Bahrain and the United Arab Emirates, which aims to further strengthen bilateral cooperation.

2 - A memorandum by the Ministerial Committee for Legal and Legislative Affairs regarding a request by the Supreme Council for the Environment to join an agreement on the establishment of the Global Green Growth Institute, which aims to promote sustainable development and improve economic, environmental, and social conditions through international partnerships between the public and private sectors.

3 - A memorandum by the Ministerial Committee for Legal and Legislative Affairs on pledges related to health and climate change, which are in line with the Kingdom of Bahrain's international commitments, and steps towards achieving an active role in climate action and the further development of the national health system.

4 - A memorandum by the Minister of Finance and National Economy on the National Gender Balance Report (2019-2020) prepared by the Supreme Council for Women. The report aims to measure the effectiveness and impact of policies and legislation in achieving the national plan for the further advancement of Bahraini women and strengthening the position of the Kingdom of Bahrain as a centre of international expertise in women's affairs.

The report revealed that the Kingdom's overall gender balance index for the years 2019-2020 increased to 69%, reaching 73% in key areas reviewed. Institutional performance index reached 65%, with an increase in participation of women in specialized jobs, the Legislative Authority, commercial activity, and representation in boards of directors and committees.

5 - A memorandum by the Minister of Industry, Commerce and Tourism on the Kingdom of Bahrain's tourism strategy (2022-2026). The strategy aims to highlight the Kingdom's status as a global tourism centre. This includes increasing the tourism sector's contribution to GDP and diversifying tourism through several initiatives and projects. The strategy intends to enhance tourist attractions, accommodation, and investment opportunities in the Kingdom.

7 - A memorandum on digital policies that aim to enhance e-government services and facilitate their use for business development.

8 - A memorandum by the Ministerial Committee for Legal and Legislative Affairs regarding the government's response to a law proposal submitted by the Shura Council.

The Cabinet then took note of ministerial reports, including; the Ministerial Conference to support stability in Libya, the annual meetings of the World Bank Group and the International Monetary Fund, and the outcomes of the 22nd meeting of the GCC Ministerial Committee of Following-up on the Implementation of the GCC Joint Work Decisions. In addition, the outcomes of the Kingdom of Bahrain's hosting of the 7th meeting of the GCC Ministers of Health Committee and the 84th GCC Health Ministers General Conference, and participation in several meetings and discussions of the Ministers of Trade and Industry of the GCC countries were reviewed.