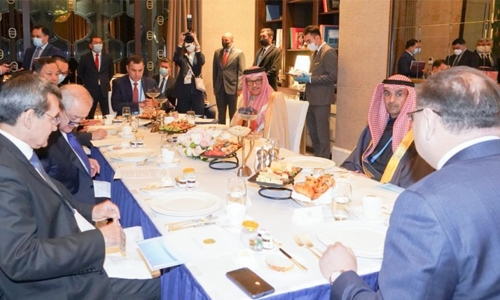 It is important to promote cooperation between the Gulf Cooperation Council (GCC) and Central Asian Group (C5) in all fields.

This was emphasised by Foreign Affairs Minister Dr Abdullatif bin Rashid Al Zayani as he stressed the depth of both sides’ historical and cultural relations.

Dr Al Zayani, also Chairman of the current session of the GCC Ministerial Council, and GCC Secretary General Dr Nayef Falah Mubarak Al Hajraf held a meeting in Kazakhstan with the foreign ministers of the member states of C5 to discuss the establishment of a strategic dialogue between GCC countries and the countries of Central Asia.

The minister explained that the GCC Ministerial Council took a decision to hold a strategic dialogue between GCC and C5 to discuss regional and international issues and cooperation in all fields, stressing the need to intensify joint efforts between GCC countries and Central Asian republics, to develop mechanisms of economic cooperation to increase trade exchange and encourage investment in various fields.

Dr Al Hajraf delivered a speech in which he stressed that the Central Asian countries are among the countries in which GCC leaders were interested in opening up ways of dialogue and cooperation, as the signing of the memorandum of understanding is the first step in the strategic dialogue towards moving relations to broader areas in all fields.

He also stressed the importance of GCC role in achieving stability, security and peace in the Middle East.

Dr Al Hajraf pointed out that the economic field in the joint action plan helps provide an attractive climate for trade and investment and enhances private sector relations between the two regions.

He noted that the presence of many historical cultural ties between the two regions will encourage strategic dialogue with Central Asian countries, cultural communication and dialogue between people.

The C5 foreign ministers expressed their appreciation for the decision of the GCC Ministerial Council to hold a strategic dialogue, stressing the interest of their countries in promoting and consolidating friendship and cooperation relations between the two sides in various fields and at all political, economic and cultural levels to meet the aspirations of both sides and achieve common interests.

Life back for ‘Little India’ in Manama

Majority of Bahraini youth express optimism about future despite challenges