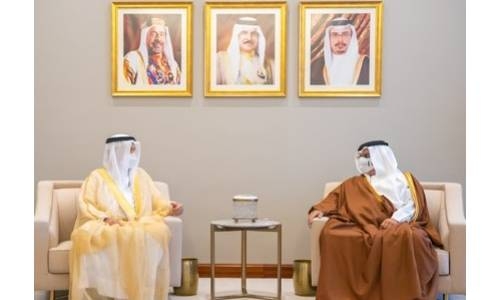 His Royal Highness Prince Salman bin Hamad Al Khalifa, the Crown Prince and Prime Minister, yesterday received the President of the Supreme Council for Islamic Affairs (SCIA), HE Shaikh Abdulrahman bin Mohammed bin Rashid Al Khalifa, who presented His Royal Highness with the first edition of his book, “The History of Judiciary in Bahrain”, at Gudaibiya Palace.

HRH the Crown Prince and Prime Minister highlighted the importance of documenting the Kingdom’s wide-ranging achievements, which acts as a point of reference for future generations.

The book presented to His Royal Highness follows the history of the Kingdom’s judiciary system since the establishment of the modern state of Bahrain in 1873 by Shaikh Ahmed Al Fateh, until the second third of 2021, during His Majesty King Hamad bin Isa Al Khalifa’s ongoing reign.

His Royal Highness extended his gratitude to Shaikh Abdulrahman, commending HE’s efforts in documenting the Kingdom’s judicial legacy and achievements, which are a bedrock of the Kingdom’s sustainable development.