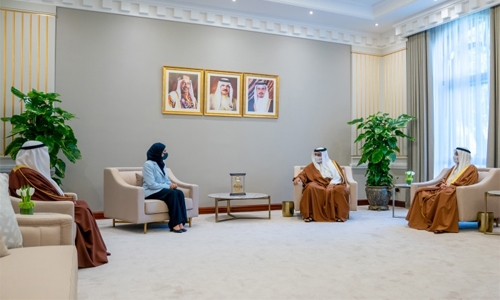 During the meeting, His Royal Highness extended his thanks and appreciation to the Speaker, Chairman and members of the Shura Council and Council of Representatives for their ongoing cooperation with the Executive Authority to achieve the Kingdom’s comprehensive development, led by His Majesty King Hamad bin Isa Al Khalifa.

His Royal Highness highlighted that cooperation between the Executive and Legislative Authorities has further strengthened the Kingdom’s legislation supporting progress that is both wide-ranging and for the benefit of all citizens.

His Royal Highness emphasised that Bahraini citizens remain central to the Kingdom’s present and future sustainable development goals and that they could be sure of the commitment of Team Bahrain, comprising the Executive and Legislative Authorities, the public and private sectors, as well as citizens and residents, in ensuring these goals are met.

His Royal Highness also emphasised the need to build on the Kingdom’s economic achievements, in line with the goals of Bahrain’s Economic Vision 2030, through timely implementation of innovative programmes and initiatives, including the Government’s Priority Framework, that benefits the Kingdom and its citizens.

For their part, the Speaker of the Council of Representatives and the Chairman of the Shura Council expressed their gratitude to HRH the Crown Prince for continually supporting joint collaboration between the Executive and Legislative Authorities to drive forward the Kingdom’s development in line with the aspirations of Bahraini citizens.

Key initiatives and programmes outlined within the 2019-2022 Government Priorities Framework were reviewed.

A number of senior officials also attended the meeting.