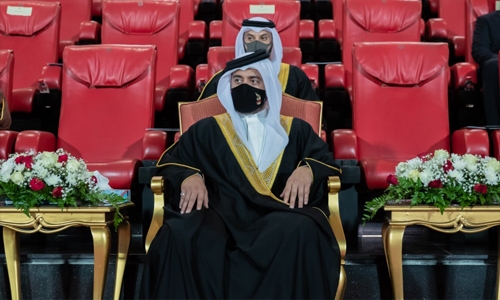 HH Shaikh Khalid bin Hamad Al-Khalifa presented Riffa with the trophy and gold medals and conveyed greetings and congratulations from HM the King on the achievement.

He paid tribute to HM the King for his support to the sports sector which enabled Bahrain to achieve honourable results and enhance its standing on the regional and international sport's maps.

He praised the role played by HM the King’s Representative for Humanitarian Work and Youth Affairs and SCYS Chairman HH Shaikh Nasser bin Hamad Al Khalifa in developing the sector of sport in the Kingdom of Bahrain.

He congratulated the Riffa Club board, chaired by Shaikh Abdulla bin Khalid Al Khalifa on the achievement and commended their efforts to ensure the team’s readiness and reach the cup final, lauding their outstanding performance in the competition.

He praised the Bahrain Football Association (BFA), chaired by Shaikh Ali bin Khalifa Al Khalifa, for the good organization which ensured the success of the cup final amid mandatory precautionary measures due to the COVID-19 pandemic.