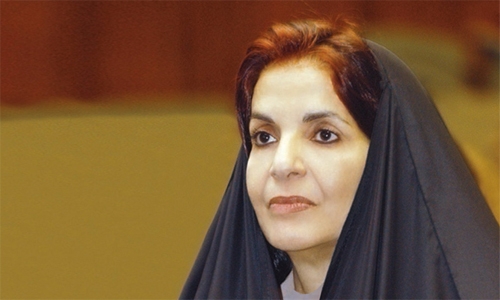 Her Royal Highness Princess Sabeeka bint Ibrahim Al Khalifa, Wife of HM the King and Supreme Council for Women (SCW) President highlighted women's achievements and contributions record in society and national affairs, which is directed by the vision of His Majesty King Hamad bin Isa Al Khalifa on Bahraini Women's Day, which marked every year on December 1, and is devoted this year to celebrate women in the field of diplomatic work.

HRH Princess Sabeeka affirmed that the SCW is always keen to assume the responsibility of implementing the directives of HM the King in Bahraini women advancement and support to meet their needs in achieving their aspirations, in cooperation with the government headed by His Royal Highness Prince Salman bin Hamad Al Khalifa, the Crown Prince and Prime Minister.

She also recalled the efforts of His Royal Highness the late Prince Khalifa bin Salman Al Khalifa in supporting the council’s activities since its establishment in 2001 which contributed remarkably in activating strategies to monitor the progress of Bahraini women at all levels.

HRH wife of HM King indicated that the SCW, in partnership with Foreign Affairs Ministry implemented Bahrain Women's Day activities program. She expressed her appreciation for diplomatic women who were able to reach the highest leadership positions in diplomacy.

HRH Princess Sabeeka congratulated every Bahraini woman, who contributed in building the present and future of Bahrain and protected the stability of her society, wishing everyone abundant health and wellness.