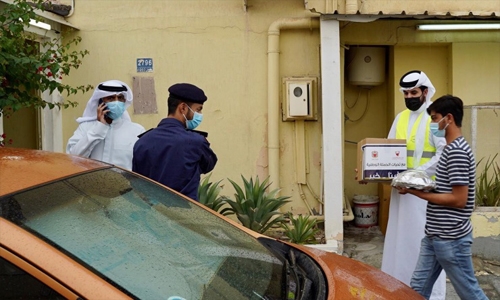 The move included the distribution of foodstuffs to families and expatriate workers across the governorate.

The Governorate’s campaign aimed to consolidate the principle of community partnership with various social segments, out of its belief in the importance of fostering the spirit of constructive participation and cooperation in such pioneering humanitarian initiatives, through providing the best requirements of safety and stability to the local citizens and residents.

Southern Governorate's Social Programmes and Community Affairs Director Mohammed Hassan Al-Faw said that such a kind gesture by  the “Feena Khair” campaign was widely appreciated by all the citizens and residents, stressing the Governorate’s keenness to continue coordinating with various official entities and NGOs to promote the values of communication, solidarity and cooperation

He also underlined the Governorate’s determination to carry on its efforts to adopt all initiatives aimed at promoting the voluntary work culture and deepening the concept of humanitarian work, especially amid the current exceptional circumstances.