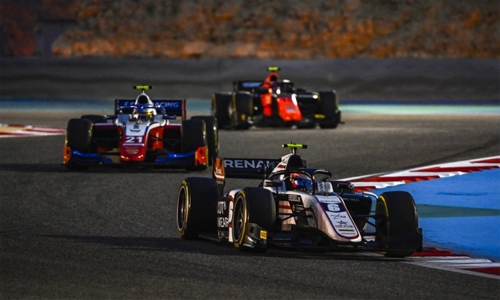 It was an eventful session that saw a crash midway through involving Red Bull Racing’s Alexander Albon, bringing out the red flag.

After the resumption of action, Hamilton took over for Max Verstappen at the top of the timesheet, clocking a best time of one minute 28.971 seconds, while completing 28 laps.

Verstappen had to settle for second on the classification with a lap 0.347 seconds slower in his Red Bull, with 34 laps. Valtteri Bottas in the other Mercedes car was third-fastest 0.365 behind his teammate and 30 laps done.

Verstappen was leading when the practice was suspended following Albon’s crash. Albon lost control of his car on the last corner, spun and hit the barrier, causing significant damage to his challenger. He was able to step out of the cockpit without assistance and was taken for some medical checks by race officials.

The rest of the drivers were classified in the following order: Daniil Kvyat of AlphaTauri, Albon, Esteban Ocon of Renault, Sebastian Vettel of Ferrari, Carlos Sainz of McLaren, Charles Leclerc in the other Ferrari, Antonio Giovinazzi of Alfa Romeo, Kevin Magnussen of Haas, Kimi Raikkonen of Alfa Romeo, Nicholas Latifi of Williams, Romain Grosjean in the second Haas and George Russell in the other Williams car.

A third F1 practice will take place Saturday over 60 minutes at 2 pm, to be followed by qualifying at 5 pm.

The Uni-Virtuosi driver registered a fastest lap of 1:41.479 in a tight Qualifying session, in which each of the top 12 drivers were classified within a second of one another.

Ilott was challenged by Felipe Drugovich for pole, but the MP Motorsport man had to settle for the other front-row grid position after setting a best lap that was 0.391s slower.

Dan Ticktum of Dams and Marcus Armstrong of ART Grand Prix will start the Feature from row two, while Ilott’s teammate Guanyu Zhou and MP’s Giuliano Alesi will be on row three.

Saturday’s F2 Feature Race will consist of 32 laps, scheduled for a 12.20 pm start at BIC.

Jaxon Evans was quickest by the narrowest of margins this evening in the weekend’s second practice of the Porsche Sprint Challenge Middle East, supporting the Formula 1 Gulf Air Bahrain Grand Prix.

Evans clocked a best lap of 2mins 04.385secs in the session, in which he completed 14 laps. He was followed by Julian Hanses who was a mere 0.001secs behind, while JB Simmenauer was classified third 0.301s adrift.

Each of the top three were competing in the series’ GT3 class Pro category.

Lucas Groeneveld was fastest among the Pro-Am participants while Eddy Waldhier was quickest amongst the Am runners.

Action in the Porsche Sprint Challenge Middle East resumes Saturday with qualifying, scheduled for 11 am. That will be followed by the first 12-lap race of the weekend at 3.50 pm. Race two will be held on Sunday.