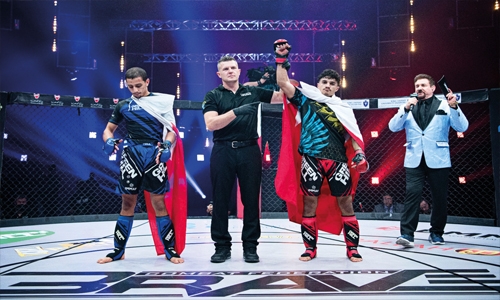 It was a mixed night for Bahraini amateurs as the youngsters recorded one win and one loss at BRAVE 45.  The first fight of the night was between Mohammed Zuhair and Ali Abuhamda, a Flyweight Amateur bout. It was all Zuhair in the first round as he began with heavy pressure and got a great takedown and worked from top position. It was more of the same in the second as Zuhair quickly secured a take down.

The third round began with a few striking exchanges but Zuhair caught a body kick and took his opponent to the ground. However Abuhamda was very aggressive from the bottom but ultimately it was not enough as the judges scored a unanimous decision (2x 30-27, 29-28) victory for Bahraini Mohammed Zuhair.

The second fight was between Bahraini Isa Alameeri and Lebanese Adon Ayoub, a 77kg catch weight bout. Both fighters engaged in a clinch early in the first round. Isa overturned the clinching exchange initiated by Adon as he secured a take down. He dominated for the rest of the round with great top control. The tide turned in the second round as Adon was able to get the first take down. This paid dividends for Adon as he was able to threaten with submissions. The Lebanese rising talent finally made a break- through when he secured an armbar, which forced the tap.

This follows two victories earned by Bahrain’s promising next generation talents at BRAVE CF 44. On the night, Mohamed Sameer and Mohammed Salah Almuamari both grabbed decision victories in their BRAVE CF debuts.