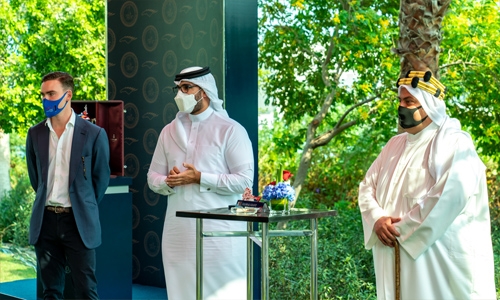 The PPD determines which position each participating horse will take in the starting gates at REHC tomorrow, when the world’s focus will be locked on the high-profile £500,000 event, which is the showpiece international horserace in the Kingdom.

Hosted by global racing personality and TV presenter Nick Luck, the PPD ceremony was also attended by REHC High Committee member His Highness Shaikh Sultan Al Deen bin Mohammed bin Salman Al Khalifa, along with representatives from sponsors Batelco, the Economic Development Board and Bapco, as well as some of the competitors.

The 14 runners are from five countries, with five of them being Group 1 winners, headlined by 2019 Irish Derby hero Sovereign and Japanese super mare Deirdre.

The race, which also sees a strong local contingent, is due off at 4pm.

Racecourse Media Group (RMG), working with REHC in Bahrain, has secured widespread global coverage for the event, headlined by Fox Sports in the US, ESPN in Latin America and the Caribbean, and SuperSport in Africa. RMG is also delighted to be working with Bahrain TV in co-producing the live one-hour world feed.

In addition to ESPN, the Caribbean will be served by SportsMax and viewers in South Africa can watch the race via Tellytrack. Seventeen countries in the Middle East and North Africa will have access to the race through the Dubai Racing Channel and Bahrain TV, while the Green Channel will show a recording of the one-hour programme to its Japanese audience.

Live coverage will be taken by RMG’s TV channel, Racing TV, and Sky Sports Racing in the UK and Ireland, while ITV, the UK’s biggest commercial broadcast, will feature the race in its Saturday programming.

Other broadcasters taking live coverage in Europe include Sport Deutschland (Germany) and SilkNet (Georgia), while Equidia (France) and TV12 (Sweden) will feature the best of the action. Racing.com and Sky Thoroughbred Central will be showcasing the racing in Aus- tralia. REHC executive director Shaikh Salman bin Rashed Al Khalifa said: “The Bahrain International Trophy, in only its second year, has attracted some of the biggest broadcasters in the world, including the likes of Fox Sports, ESPN and SuperSport, who are taking the race-day for the first time.

“We are delighted with the international interest, generated by our media partners, Race- course Media Group.”

RMG Communications and International TV Distribution director Seb Vance added: “We are honoured to be working with REHC again and absolutely delighted with the international interest from broadcasters. The race looks like being a fantastic contest and racing in Bahrain is clearly resonating around the world.”

The Bahrain International Trophy is the seventh and main race on tomorrow’s card. It will be held over a distance of 10 furlongs.

Six other Cups will be on offer in tomorrow’s supporting races, including two Bapco Cups, a pair of Batelco Cups and two Bahrain EDB Cups.