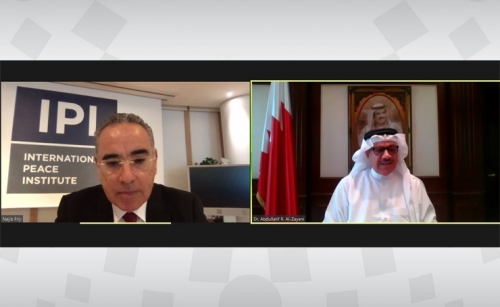 The Foreign Minister was speaking as he held a virtual meeting with Manama-based International Peace Institute for the Middle East and North Africa (IPI-MENA) director Nejib Friji. The two sides reviewed the activities of the IPI at the international and regional levels in the field of research, study, and multilateral cooperation to confront the challenges facing the achievement of peace, security and sustainable development.

The Foreign Minister praised the initiatives and projects of the IPI in dealing with the challenges of the coronavirus (COVID-19), and hailed the efforts of the Kingdom, led by His Royal Highness Prince Salman bin Hamad Al Khalifa, Crown Prince, Deputy Supreme Commander and First Deputy Prime Minister, in combatting the pandemic.

For his part, the IPI-MENA director lauded the model set by Bahrain in dealing with COVID-19 and valued the Kingdom’s pivotal role regionally and internationally in support of peace efforts. The IPI-MENA office aims to promote policy research on global peace and security within the region.

This office focuses on MENA issues that contribute to the international community’s efforts to strengthen the collective capability regarding conflict prevention, multilateral diplomacy, mediation, peacekeeping, and peacebuilding.

Dr Al Zayani highlighted the friendly relations of cooperation between Bahrain and Kosovo, affirming the keenness of the Kingdom to further develop these relations at all levels, for the benefit of both countries and peoples.

The Kosovo minister hailed the development of relations between the two countries in all fields, and wished Bahrain continued progress. The two ministers further discussed a number of regional and international issues of mutual concern.