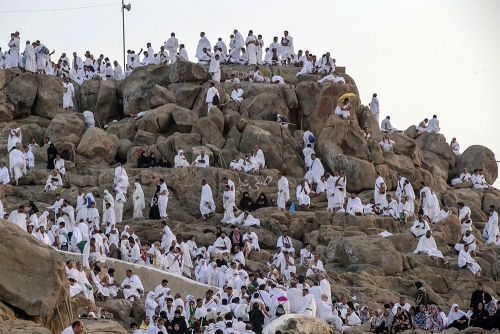 HM King said the efforts ex- erted by King Salman and his government to hold Hajj rituals while implementing adequate precautionary measures ensured the highest levels of safety and health for pilgrims.

King Hamad prayed to Allah the Almighty to grant Hajj pilgrims many rewards and forgiveness, wishing Saudi Arabia and its brotherly people further progress and prosperity, under the leadership of the Custodian of the Two Holy Mosques.

The premier also praised King Salman’s noble stances in support of Arab and Islamic nations, which, he said, “reflect the pivotal role Saudi Arabia plays, under its wise leadership.”

HRH commended Saudi Arabia’s tremendous efforts, led by King Salman and the govern- ment, to hold the Hajj pilgrimage by implementing adequate precautionary measures to ensure the highest levels of safety and health for pilgrims.

Hajj held this year amid exceptional circumstances resulting from the spread of the novel coronavirus (COVID-19), ends also leaving a smaller carbon footprint, less waste and opening up the prospects of a ‘green Hajj.”

The event, which drew 2.5 million people last year and completed this year with just around 10,000 pilgrims, according to experts, was by all accounts a breath of fresh air.

According to a Greenpeace expert, it was not about the size of the crowd, but “collective behaviour” that effected the change.

“This year’s Hajj, although taking place at a difficult time globally, can be a source of hope,” he said.

The scenes in Mecca since the Hajj began on Wednesday are very different from those of past years.

Rather than the vast crowds that move between the sites, casting rubbish as they go and sometimes prone to deadly crushes, the movement of the pilgrims has been

limited and orderly. Even the pebbles they use to symbolically “stone the devil” have been sanitised, as part of elaborate amenity kits provided by authorities that include disinfectant and masks.

“Everything is clean and there are only a few municipal workers collecting the small amounts of garbage,” Azim Allah Farha, a pilgrim from Afghanistan who has performed the hajj several times before, said at Mount Arafat, the site of one of the main rituals.

One of those workers, Rahim Fajreddine, recalls the hundreds of tonnes of rubbish plastic bags, cans and food plates left in past years at the rocky hill outside Mecca where pilgrims pray and repent in the high point of the hajj.

“Large numbers of workers had to be mobilised to remove all the debris they left behind as they passed,” he recalled.

Until recently, the concerns were not really about the environment, but about accommodating as many pilgrims as possible, for the long waiting lists for Muslims, who must complete the Hajj at least once in their lifetime if they are able.

As part in 2018, authorities launched a water recycling programme and posted several signs in multiple languages to encourage pilgrims to dot their bit.

This year, despite the scaled down pilgrimage, the municipality deployed over 13,000 cleaners to keep the holy site pristine.

This is the future

Nouhad Awwad, the Greenpeace campaigner, said although this year’s smaller environmental footprint was greatly due to the pandemic, in going forward this will be the desired outcome.

She imagines “a Hajj with its millions of pilgrims in total symbiosis with their environment, in a Mecca powered by solar energy”.

“This is the future we should all be working towards,” she insisted.