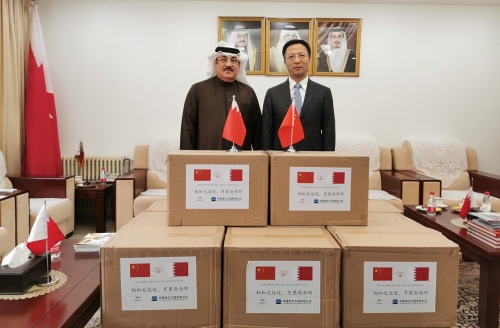 Also present during the meeting were Embassy third secretary Ali Abdulhameed and CNEEC Middle East, South and South Eastern Asia regional general manager Ge Jian. The company’s delegation expressed their sincere condolences to the families of those who have died because of the virus, and, at the same time, wished those infected a quick recovery.

The delegation also praised the measures taken by Bahrain to mitigate the virus’ spread and provide much-needed medical care to patients, as well as raise awareness among citizens and residents. Furthermore, the CNEEC delegation expressed their readiness to double their medical supplies to the Kingdom as well as support its tireless efforts against the pandemic and reduce the active cases as well as deaths.

The Bahraini Ambassador underlined the deep relations knotting Bahrain with China, and highlighted the growing bilateral cooperation between the two countries. He valued the public and private sectors’ contributions in China towards backing countries, including Bahrain, to reinforce their abilities against the pandemic. He also praised the donation made by CNEEC. He conveyed the best wishes of Electricty and Water Affairs Minister Wael bin Nasser Al Mubarak, EWA CEO Shaikh Nawaf bin Ibrahim Al Khalifa and all EWA staff.