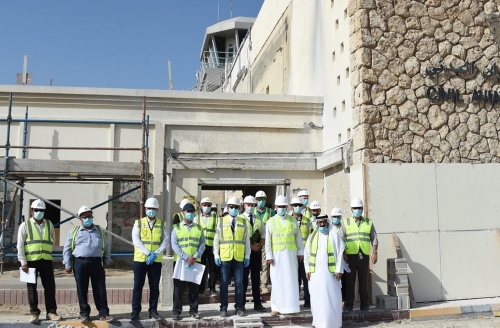 Works are well on track to create a new private aviation terminal at the Bahrain International Airport (BIA) by renovating and repurposing the original Civil Aviation Affairs (CAA) building.  The project, part of the Ministry’s plan to offer services to private jet owners through BIA and a comprehensive strategy to enhance the infrastructure of BIA, was first announced during the Bahrain International Airshow held from 14-16 November 2018.

The expected completion date of the project, which began in October last year, is February 2021.  This came as the Minister of Transportation and Telecom - munications and Bahrain Airport Company (BAC) Chairman, Kamal Ahmed, paid an inspection visit to the project premises.

Accompanying the Minister were representatives from “Gulf House Engineering” (GHE), which is responsible for the design, “Hafeera” Contracting Company, the main contractor for the project, and BAC officials. The move, as per the directives by His Royal Highness Prince Salman bin Hamad Al Khalifa, the Crown Prince, Deputy Supreme Commander and First Deputy Prime Minister, is one of the main components of the airport modernisation programme.

Works are ongoing, the minister was told, to ensure on-schedule delivery, such as a partial demolition of the building and the steelworks associated with it. The minister highlighted the importance of the adhering to Internationally recognised standards and finish as planned by February 2021.

The private aviation terminal is one of the main components of the Airport Modernisation Programme, an important step in achieving Bahrain’s Economic Vision 2030, the minister said.  The project aims to give VIPs greater freedom and ease of travel through Bahrain International Airport and provide the highest levels of service.

It also supports the development of the Kingdom of Bahrain’s private aviation sector. Reports say Adventure Air Centre, a wholly-owned entity of BEXAIR Group, is one of the FBOs now exists at the airport.   According to Paramount business jets, frequently chartered aircraft in the Manama and Bahrain area include light jets (Hawker 400XP), midsize jets (Hawker 750 and Learjet 60XR), and large jets (Legacy 600, Gulfstream IV, and Challenger 605).

‘We serve you at Your home initiative’ gains cheers