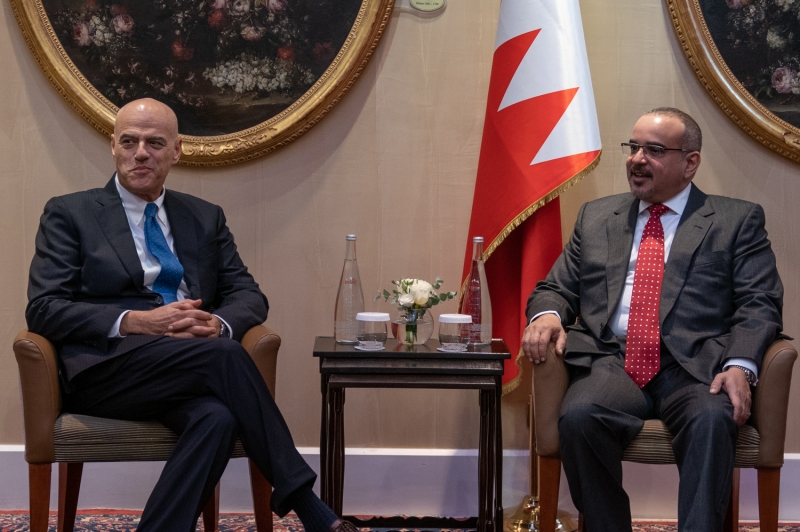 As part of the delegation, Alba’s Chairman of the Board of Directors Shaikh Daij bin Salman Al Khalifa met with key Italian companies, including Fluorsid, FATA and Techmo Car, where important agreements were signed to advance commercial opportunities for both parties.

Commenting on the occasion, Shaikh Daij said: “Alba is pleased to be part of the Bahraini delegation to Italy led by HRH the Crown Prince, Salman bin Hamad Al Khalifa. As one of the key contributors to Bahrain’s economy, Alba is deeply committed to realising the Kingdom’s Economic Vision 2030. Through these signed agreements, Alba aims to further strengthen its relationship with Fluorsid, FATA and Techmo Car as well as explore more avenues for future collaboration.”

Alba has an existing contract with Fluorsid for the supply of 15,000 to 20,000 tonnes of smelter grade Aluminium Fluoride, around 70 per cent of Alba’s yearly requirements. FATA is the Engineering, Procurement and Construction (EPC) contractor for Alba’s Port Capacity Upgrade Project, part of Alba Line 6 Expansion Project, while Techmo is a producer of high-end mobile and stationary equipment for the aluminium and metal production sector and enjoys a long-standing commercial relationship with Alba.

The agreement is part of GPIC’s strategy to expand operations and build on recent successes by studying the viability of implementing new projects within its industrial complex at Sitra and leverage the discovery of Bahrain’s largest oil field, which was announced in 2018.

In a statement to mark the occasion, the Minister of Oil, Shaikh Mohammed bin Khalifa Al Khalifa, expressed the support of the National Oil and Gas Authority (NOGA) to all its subsidiary companies, noting their contribution to the development and sustainability of the Bahraini economy and attraction of foreign investments into the Kingdom.

In this regard, the minister highlighted that the strategy for Bahrain’s Oil and Gas sector is in line with the Kingdom’s comprehensive development goals, led by HM the King, and receive the continuous support of HRH the Prime Minister and HRH the Crown Prince.

The Minter of Oil highlighted GPIC’s proven excellence in production and marketing, adding that the company’s expansion projects have the full support of both the government and shareholders. The Minister of Oil added that the agreement signed with Saipem will enhance GPIC’s ability to increase production, expanding its contribution to the Kingdom’s economy, in line with the directives of HRH the Crown Prince.

The agreement will facilitate joint assessments as well as the launch of new initiatives in areas of mutual interest, including renewable energy, the supply of Liquefied Natural Gas (LNG) supply, and exploration.

Shaikh Mohammed recognised the delegation’s visit as a platform to further expand investment opportunities in the energy sector, and underlined the benefits of further increasing the exchange of expertise as a means to advance the Kingdom’s oil and gas sector.

Among others, Export Bahrain, the national export promotion agency, signed an agreement with SACE, the Italian Export Credit Agency, to increase exports between the two countries.

Under the agreement, Export Bahrain and SACE agreed to exchange information on business opportunities to further promote exports, including utilising the exchange of knowledge to aid capacity building. 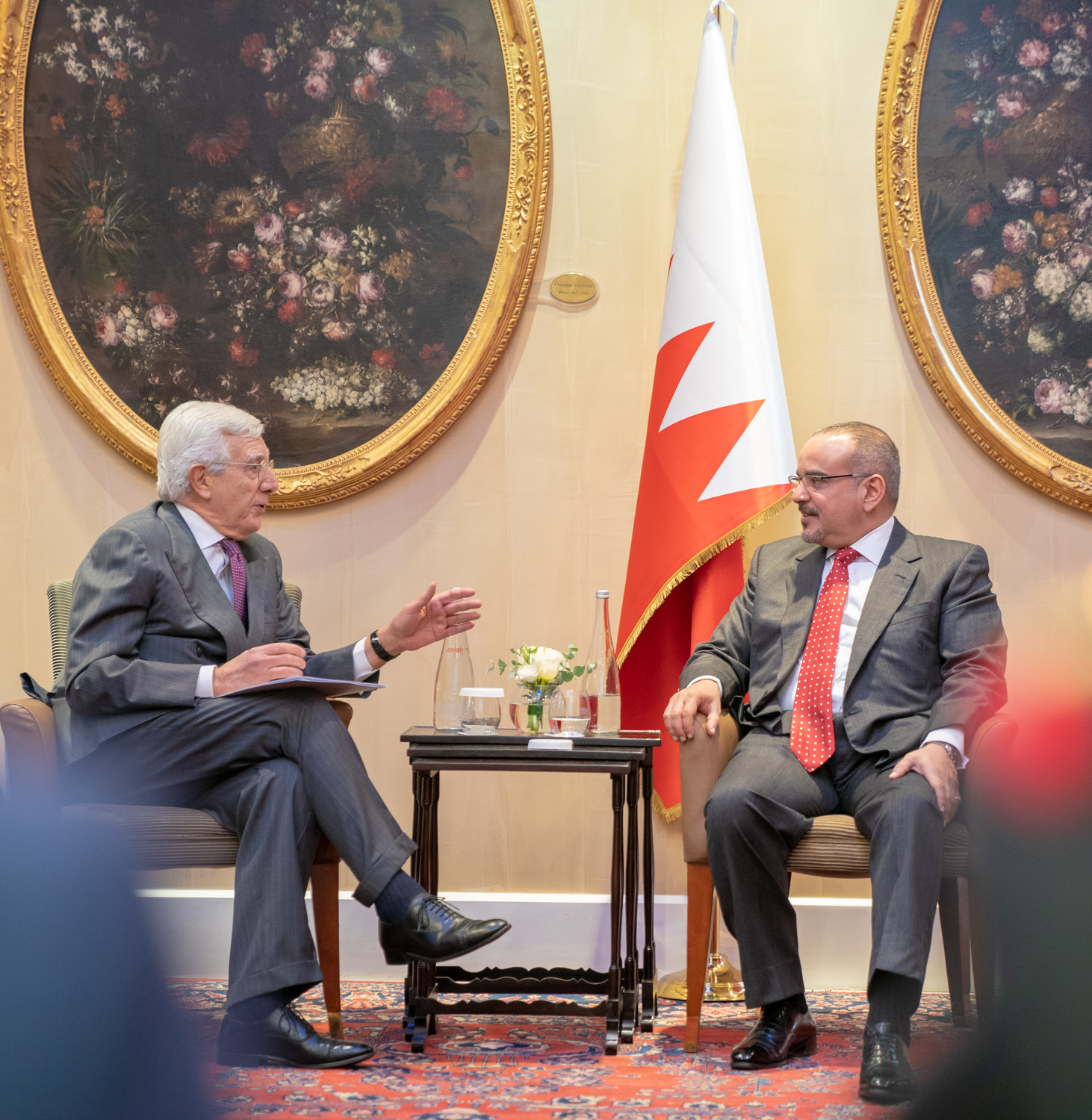 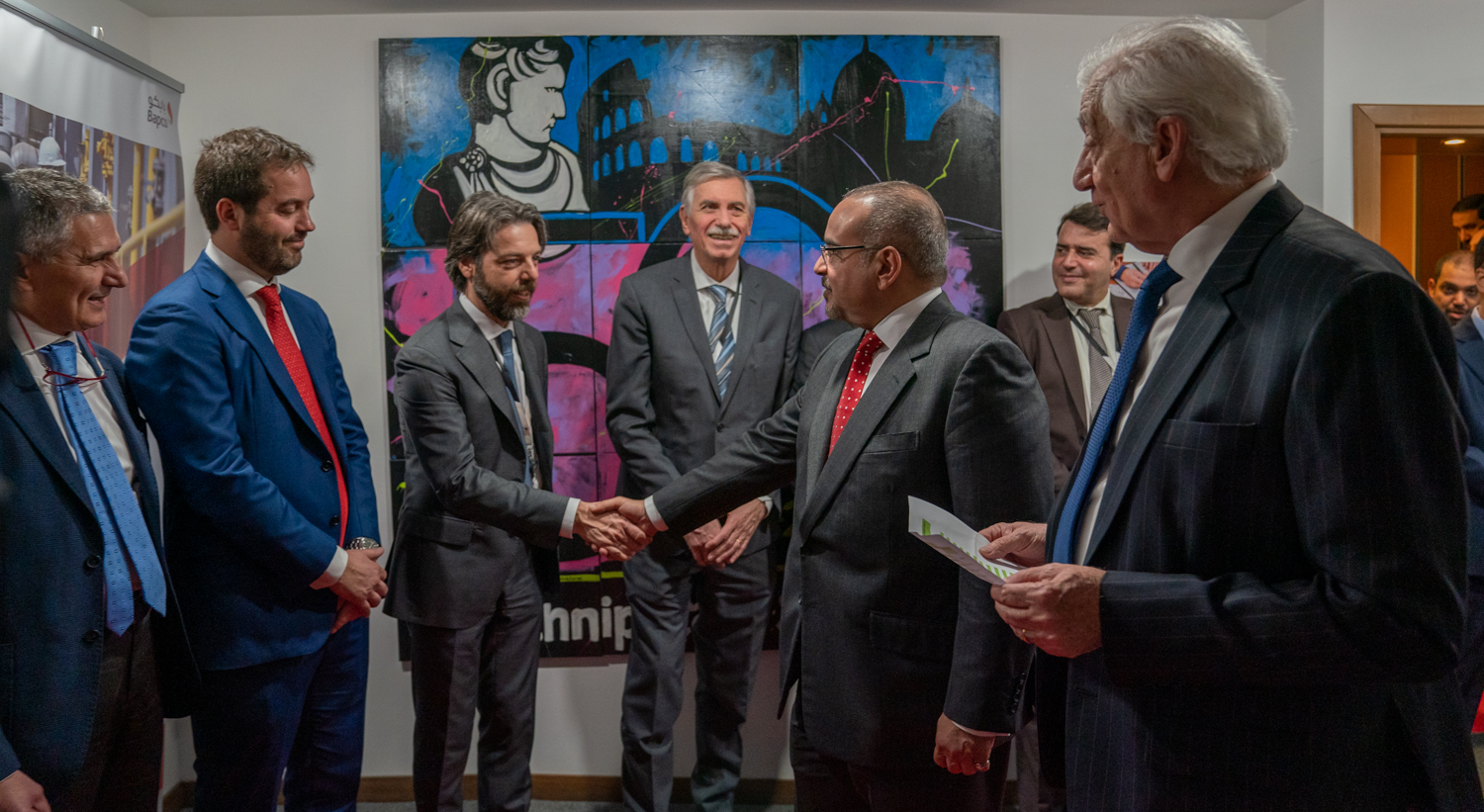 HRH the Crown Prince being received at TechnipFMC. 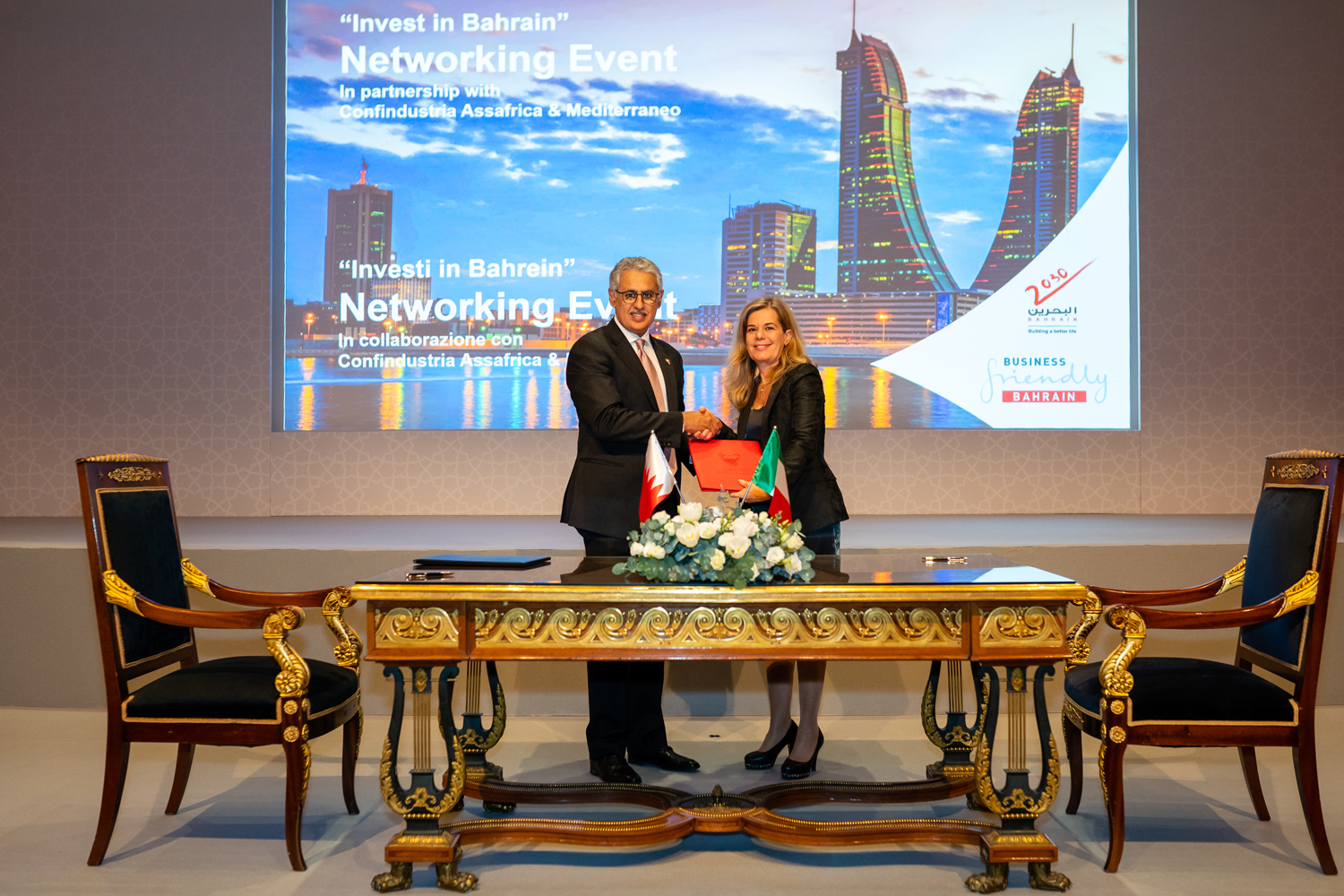 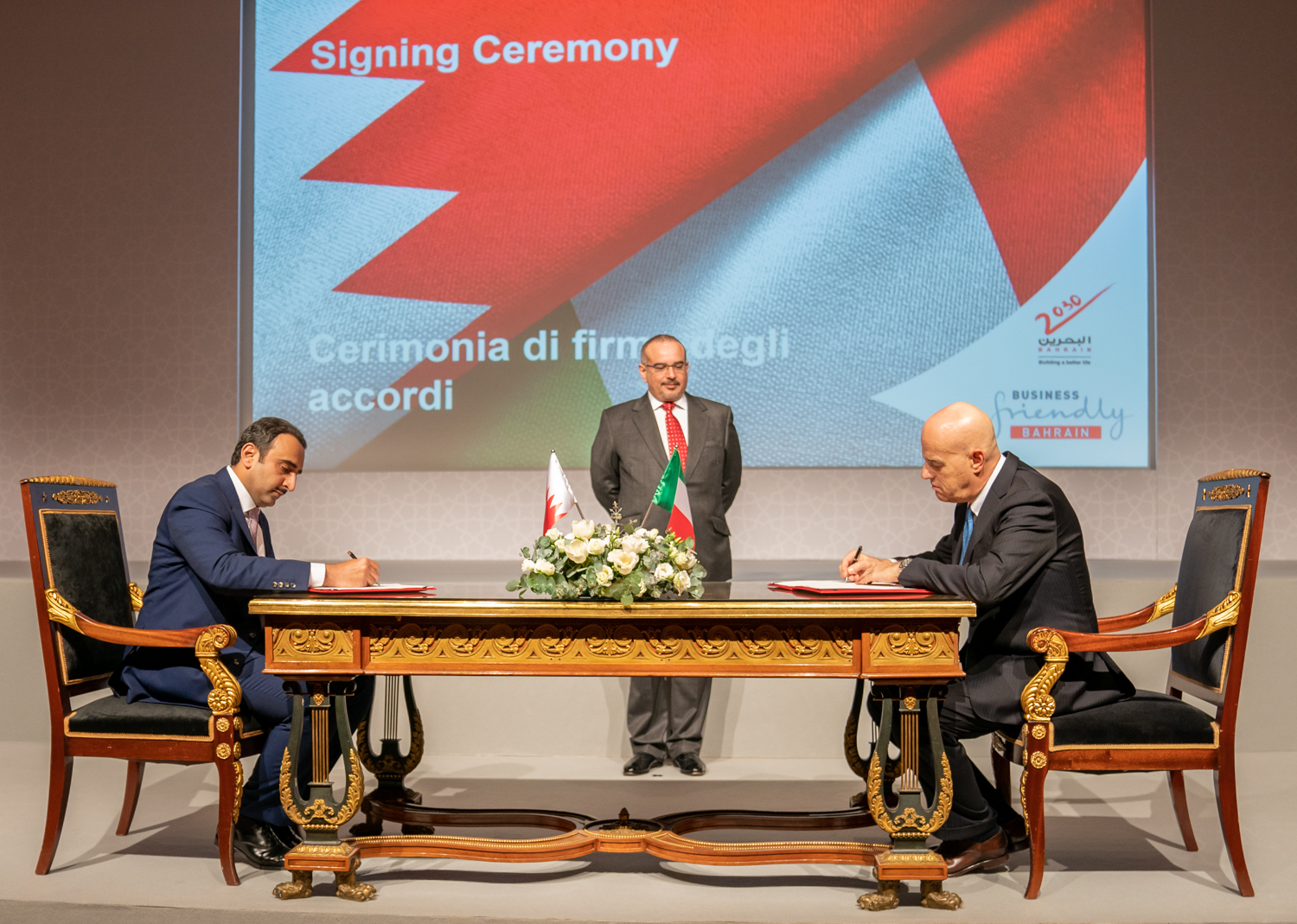 In the presence of HRH the Crown Prince, Shaikh Mohammed signs the agreement. 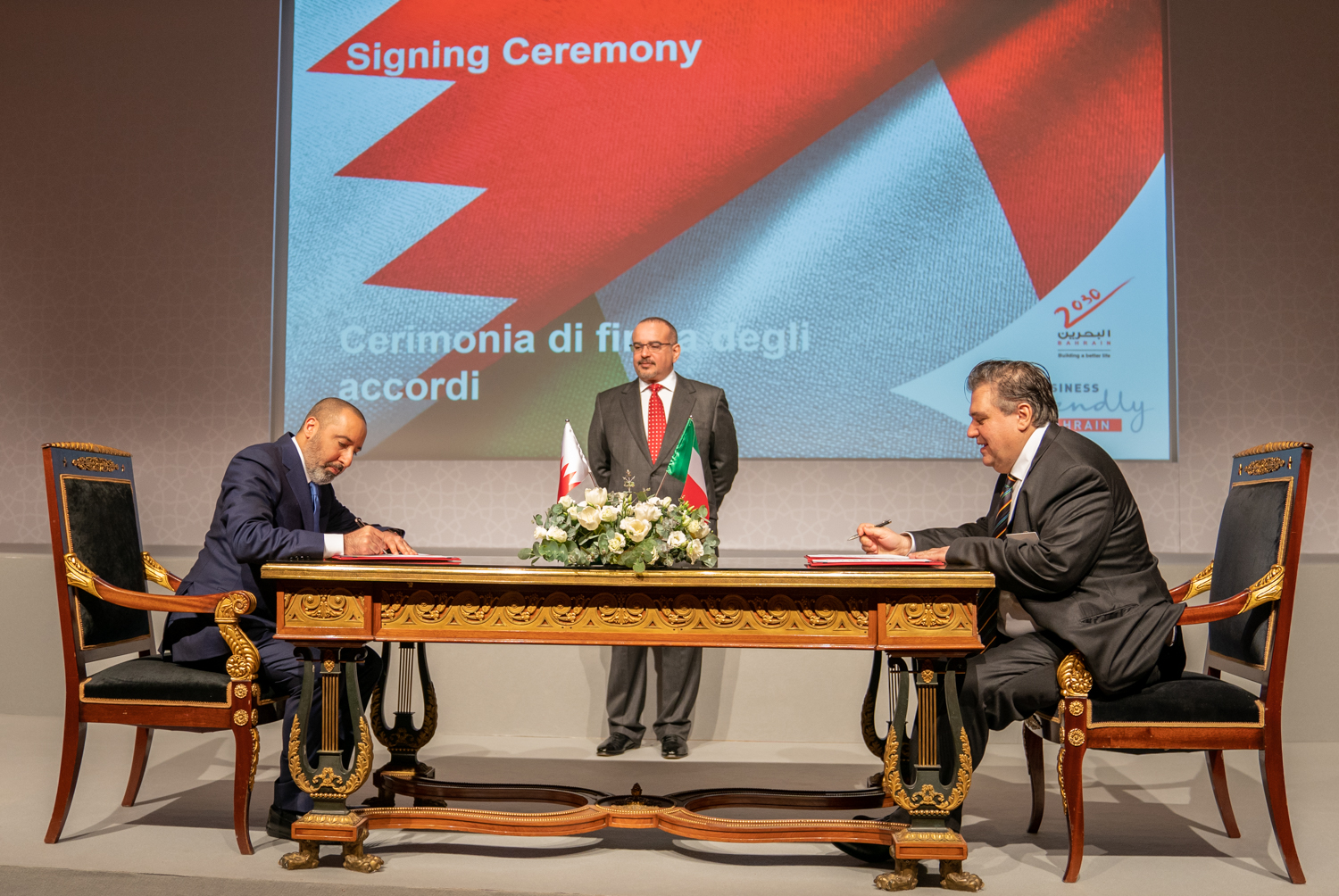 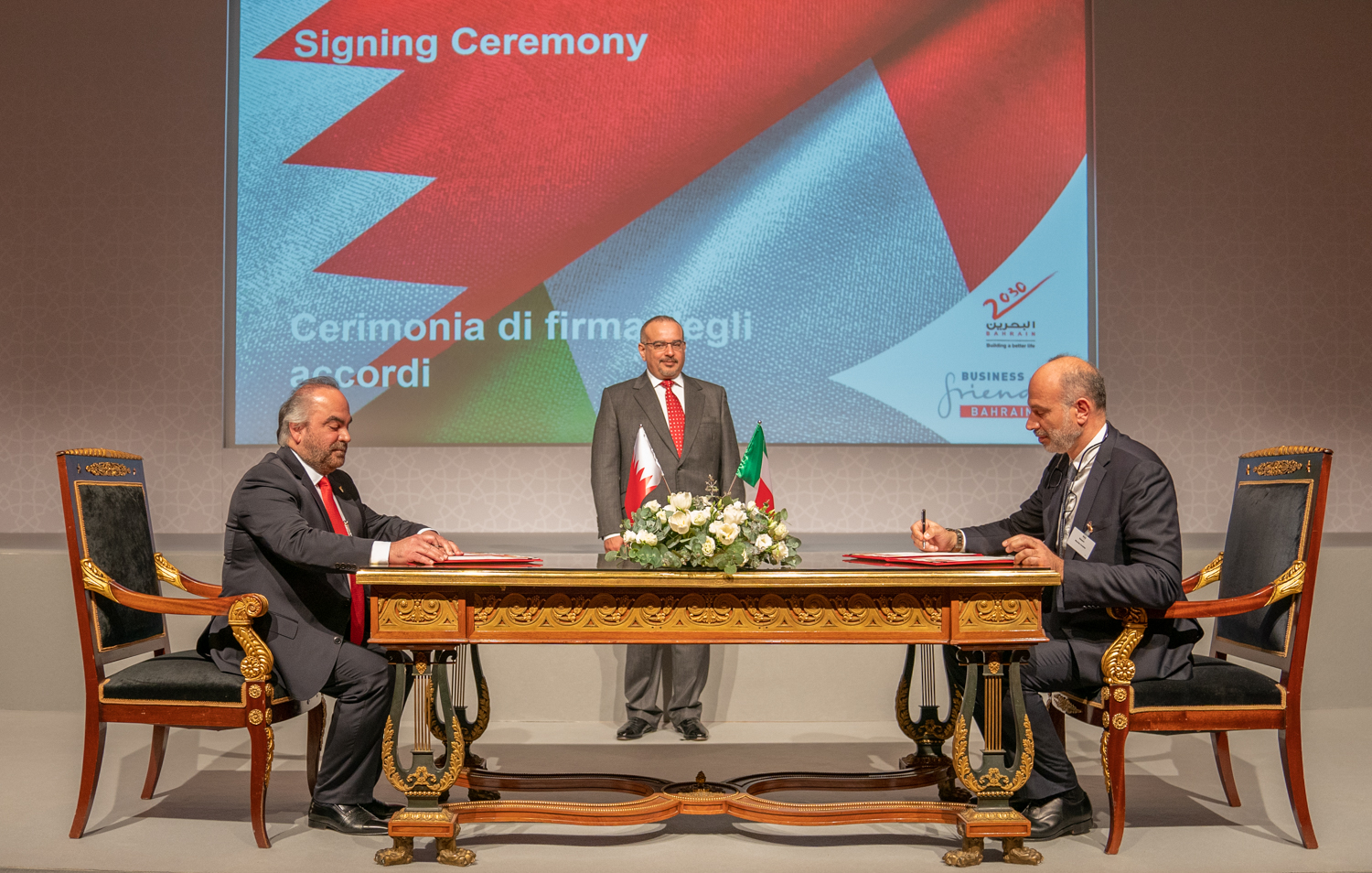 In the presence of HRH the Crown Prince, President of GPIC, Dr Abdulrahman Jawahery, signs the agreement.