Ironman 70.3 a big success | THE DAILY TRIBUNE | KINGDOM OF BAHRAIN 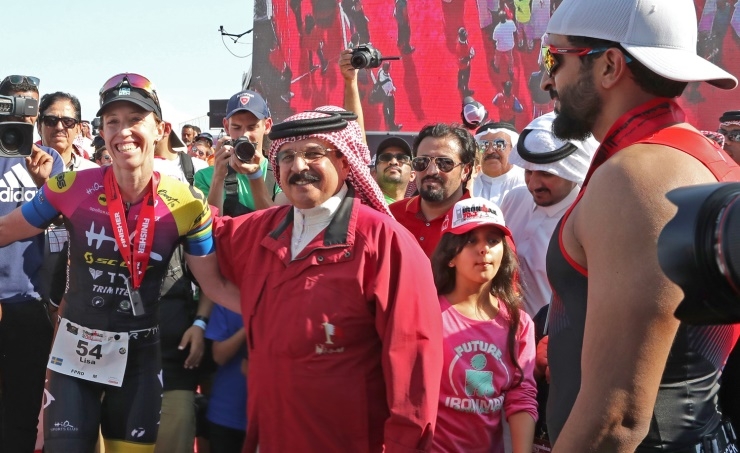 His Majesty King Hamad bin Isa Al Khalifa yesterday attended the conclusion of Ironman 70.3 Middle East Championship Bahrain, which kicked off with the participation of 1,500 competitors from 90 countries, including the Kingdom of Bahrain and the GCC member states. His Majesty was accompanied by First Deputy Chairman of the supreme Council of Youth and Sports (SCYS) and President of Bahrain Olympic Committee (BOC) His Highness Shaikh Khalid bin Hamad Al Khalifa. HM the King was welcomed on arrival by Minister of Youth and Sport Affairs Ayman Al Moayed and senior organisers of the race. The King watched the competitions, which included swimming, cycling and running. At the end of the championship, HM the King crowned HH Shaikh Nasser bin Hamad Al Khalifa who clocked 29,39 (twenty-nine minutes and thirty-nine seconds) in the swimming race, 2,20 (two hours and twenty seconds) in cycling and 1,30,34 (one hour, thirty minutes and 34 seconds) in running. HH Shaikh Nasser bin Hamad Al Khalifa clocked an overall time of 4,6,51 (four hours, six minutes and fifty-one seconds).

HM the King also crowned the professional winners in the man category. They are Norwegian Kristian Blummenfelt who clinched first place, clocking 3,42,20, Danish Daniel Baekkegard who came second, clocking 3,43,02 and third place winner Norwegian Casper Stornes who clocked 3,43,46. HM the King also crowned the winners in the women category. They are British champion Holly Lawrence, from Bahrain Endurance Team, who clinched first place clocking 3,52,35 while second place went to British Jodie Stimpson (3,55,29) and third place to British Claire Hann (3,55,51). HH Shaikh Nasser expressed his utmost thanks and appreciation to His Majesty King Hamad bin Isa Al Khalifa for honouring the Ironman 70.3 Middle East Championship with his presence yesterday. HH Shaikh Nasser said that it confirms His Majesty the King’s support and backing of the sports activities that are organised in Bahrain and it reflects the development of the Kingdom in the bright era of His Majesty the King.

HH Shaikh Nasser pointed out that His Majesty’s attendance at the event and cheering of the participants at the finish line, as well as crowning the winners, represented the biggest support for the Kingdom of Bahrain’s sports. “It’s a great honour for us to receive the medal of the Ironman 70.3 Middle East Championship from His Majesty the King at the finish line,” said HH Shaikh Nasser. “It’s a source of motivation for every sportsperson to produce their maximum efforts towards upgrading and improving our sports, in line with His Majesty’s vision.” HH Shaikh Nasser was very close to setting a new international record after going just two minutes away from it in the cycling stage. “I spent much energy in the swimming race and this impacted my performance in cycling,” HH Shaikh Nasser said. “I came close to breaking the international record which I set in Bahrain. I promise you that I will break this record like I lived up to my promise to win the world championship in Kona.” Under the patronage of HRH Prince Salman bin Hamad Al Khalifa, the Crown Prince, Deputy Supreme Commander and First Deputy Prime Minister, the closing ceremony of the Ironman 70.3 Middle East Championship Bahrain took place later yesterday at Bahrain Bay.  HRH the Crown Prince highlighted Bahrain’s long-standing success in attracting and hosting sports events within the Kingdom. HRH welcomed in particular the Kingdom’s role in facilitating youth and sporting events.  HRH the Crown Prince noted HM the King’s support to the youth and sports sectors and the long list of citizen achievements in these fields.