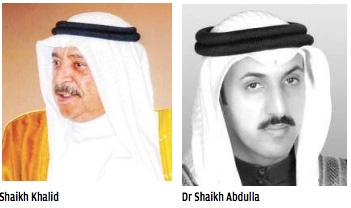 Under the patronage of Royal Court Minister Shaikh Khalid bin Ahmed Al Khalifa, Minister of the Royal Court, the Bahrain Centre for Strategic, International and Energy Studies “Derasat” will celebrate its tenth anniversary on December 14. Bahraini officials, Arab and International diplomats, the media, and representatives of a number of regional think tanks, coinciding with the National Day celebrations in the Kingdom will attend.

Celebrations will be held under the theme “from vision to reality”, set to include a demonstration of a decade’s achievement, including conferences, publications, seminars, and survey polls, in the reign of His Majesty King Hamad bin Isa Al Khalifa, and His Majesty’s comprehensive reform programme and Bahrain’s 2030 Economic Vision. “We are truly grateful to Shaikh Khalid bin Ahmed Al Khalifa, Minister of the Royal Court, for his gracious patronage of Derasat’s decade celebration, for which all staff feel honoured,” said DERASAT Board of Trustees’ Chairman Dr Shaikh Abdulla bin Ahmed Al Khalifa. “We strived for ten years to make Derasat a beacon of thought and knowledge in the Kingdom of Bahrain.

The centre is a virtue of His Majesty’s wisdom, with whose blessings it was founded, anticipating its support in government decision making, and increasing national gains for Bahrain’s future,” he added. “His Majesty’s wisdom identified the urgent need to supplement the Kingdom’s building process, based on a solid foundation of knowledge that benefits from world developments to realise visions, study trends, identify priorities, and research policies; all through seminars, research workshops, and conferences that present ideas, solutions, and treatments for many local and regional challenges,” he said.

“The Centre always made every effort to be objective when pursuing facts, through its several instruments, aiming to increase the understanding of current and emerging international issues,” said Dr Shaikh Abdulla, adding that, “this is a contribution by the centre to achieve world peace, and the message of the Kingdom’s wise leadership and people, utilising research, dialog, and survey polls to measure trends in public opinion; conducting accurate, objective, and impartial studies and field surveys on various local, regional, and international issues, and use the data and results to serve researchers, decision-makers, and society.”

He underlined Derasat success in assuming renewable roles to rise up to His Majesty’s vision to increase dependence on scientific research in addressing society’s issues and citizens’ wellbeing, contributing to regional security and stability, and spreading the values of tolerance and coexistence. “Derasat has become a prominent think tank on a global scale; considered among the top five research centres in the Middle East, with a wide and comprehensive outreach of partnerships with numerous centres and international organisations, the foremost of which is the United Nations; having also organised and participated in prestigious international events,” said Dr Shaikh Abdulla. Dr Shaikh Abdulla concluded his statement by commending Derasat’s team of researchers, administrators and affiliates for their cooperation and perseverance, asserting that Derasat has the confidence, will and aspiration to continue in its pursuit of leadership and achievements. Derasat was formed as a specialised centre through Royal Decree 52/2009, to contribute to evolving an open, objective and independent environment; and to conduct studies and research in strategic, international and energy domains; as well as co-operating with research centres and scientific organisations.