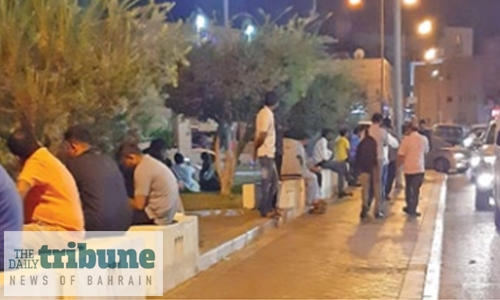 Authorities have been urged to take strict action against an expatriate gang, which is accused of regularly eve-teasing women near a public park in Manama. Sources said every day by evening members of the alleged gang gather near Awal Square in Manama, opposite to Al Hamra Theatre, with an aim to target women. They pass offensive comments on women, making it difficult for them to visit the park as well as nearby areas.

Sources said even couples are targeted by this gang. “Eve-teasing and stalking have become a big worry for families living in that area,” said an expat housewife, who doesn’t want to be named. “A group of drunken men are regular in the job. They not only pass lewd comments, but also try to get close, which is a frightening experience for any woman,” she bemoaned. She said authorities should not turn a blind eye on the issue and must take adequate steps to tackle these “dangerous men”.

“Bahrain is one of the best countries in the world for women. A few days before only we celebrated Bahraini Women’s Day and what’s happening near this park is an insult to all women, be it a Bahraini or an expat.” She added some members of the gang also have the habit of clicking pictures of women who passes by the area.

“They even get close to women and ask how much do they need to have a physical relationship? This is terrible and no woman can ever tolerate such comments. “I request the authorities to take immediate action against the members of this eve-teasing gang. They should be penalised as Bahrain has no place for eve-teasers and stalkers.”