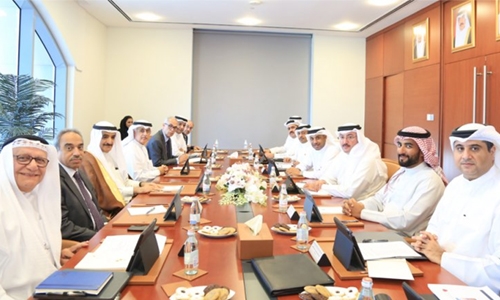 The pilot phase of Real Estate Data Bank will be launched next year by the Real Estate Regulatory Authority. This came as RERA Board of Directors, chaired by Shaikh Salman bin Abdullah bin Hamad Al Khalifa, President of Survey of Land Registration Bureau and Chairman of the Real Estate Regulatory Authority (RERA), met yesterday. During the meeting, the board was briefed on the latest developments of the RERA’s business and operational activities.

Shaikh Salman bin Abdullah Al Khalifa and members of the RERA Board of Directors commended the achievements of the Executive Management in the process of preparing and issuing the Bahrain Valuation Standards (BVS). These standards will increase transparency, consistency and confidence in the real estate valuation process through the use of internationally recognised and approved bases and methods of valuation, they observed.

Implementation of such international standards will assist in increasing the contribution of the real estate sector to the nonoil economy which supports the vision and aspirations of His Majesty King Hamad bin Isa Al Khalifa, aimed at presenting the best initiatives and policies that will place Bahrain among the leading and developed countries for the further prosperity of the Bahraini citizen, they added.

He also thanked the Board of Directors for the attention given by His Royal Highness Prince Khalifa bin Salman Al Khalifa, the Prime Minister, to the real estate sector and for the support of the Coordinating Committee chaired by His Royal Highness the Crown Prince, Deputy Supreme Commander and First Deputy Prime Minister in the implementation of real estate programmes and projects. The Board of Directors approved some decisions, including the creation of a new license category, real estate leasing agents.

The Board also agreed to allow the transitional licensees to continue the valuation of Real Estate transactions up to value BD three million for a period of 12 months ending on 2 November 2020, in order to avoid any disruption in the real estate valuation market. The Board approved the issuance of a circular to all users of real estate valuation services, including financial institutions, courts and relevant government agencies to only deal with RERA licensed valuers.

The Board discussed the work being conducted on the development of a Real Estate Databank, which is expected to launch on a pilot basis in Quarter 1, 2020. The Real Estate Databank aims to provide investors and property developers with accurate, reliable and timely data in order to make more informed investment decision. The availability of such information is of great importance and will stimulate increased investment in the Bahrain real estate market.

Shaikh Salman praised some of the leading real estate investment projects in Bahrain. Shaikh Mohammed bin Khalifa Al Khalifa, Chief Executive Officer of RERA, gave a detailed presentation and update on RERA’s business and activities. He also outlined the proposed timetable for issuing the remaining Resolutions under Law (27) for 2017, as well as an update on the transitioning of existing large development projects as per Law No. (27) of 2017.