Gone in 48.14 seconds | THE DAILY TRIBUNE | KINGDOM OF BAHRAIN 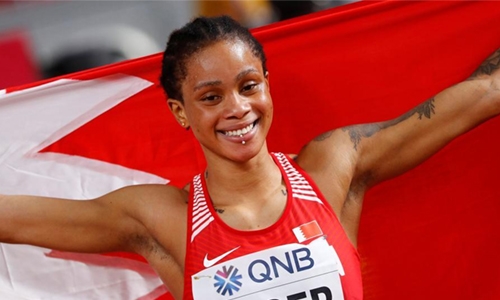 As the gun fired erupting the stadium into a big roar and powering the runners into a sudden burst of pace, the commentator screamed: “Look at the smooth running of the Salwa Eid Naser down the back straight.”

“She is poetry in motion.” The scene is 2019 IAAF World Championships. Up against her on the track is the defending champion in the 400 meters American Phyllis Francis who claimed a shock gold last time in a dual with multi-medalled American Allyson Felix and Olympic champion Shaunae Miller-Uibo. But all those hardly matter at the moment, as Salwa broke through into the lead and the final 100 meters. The sta- dium got into a frenzy. Bahraini hearts were pounding faster.

Miller-Uibo is gaining, just behind her is American Allyson Felix - Salwa’s idol. The gap is getting closer. “But Salwa Eid Naser is not to be denied….,” the ecstatic voice of the commentator filled the stadium, above the roar, as she crossed the finish line in a jiffy. “What a performance, What a time, she beats the Olympic champion with one of the fastest times we ever have seen.”

“Only two woman up ever, ever, run quicker,” the voice said as an astonished Salwa down on to her knees, covering mouth with her hand, looked around in disbelief.

‘She ran a crazy race’

“This is crazy,” she said. “I was just hoping for the best but now I’m world champion.” The 21-year-old Bahraini, blew all the possibilities over one lap apart, by registering a stunning 48.14-sec finish, which is also a one-second improvement over her personal best. As Salwa struggled to bring her to terms with the astonishing result, Shaunae Miller-Uibo, the prerace favourite from the Bahamas, stood struck in disbelief.

Uibo has bettered her Caribbean record of 48.97 by half-a-second but had to settle for a silver medal (48.37) despite running the sixth-fastest time in the history. Shericka Jackson of Jamaica claimed bronze as defending champion Phyllis Francis, with a personal best of 49.61, settled for a fifth place.

“To do a time like that and not win is incredible,” Uibo, who had not lost a race since August 2017, reflected. “She ran a crazy race.” As said earlier, only two women have done this before. Marita Koch of erstwhile East Germany in 1985 with her stunning 47.60- sec finish and Jarmila Kratochvilova of Czechoslovakia in 1983 with her 47.99-sec finish.

But those performances are still surrounded by doping scandals. Neither Koch nor Kratochvilova failed a doping test but their countries are known to have operated state-sponsored programmes as athletic supremacy was viewed by their rulers as a weapon in the battle between east and west.

Fast forward to 2019 and in front of you is Naser. No one imagined she was capable of doing this here, which was also her fifth race in five days. But, then, all of us were wrong. “Starting two lanes to Miller-Uibo’s inside, Naser had made up most of the stagger by the end of the back straight. She then powered clear on the bend and defied the favourite’s efforts to run her down,” IAAF reports.

But as Telegraph described, “Naser set off like a woman possessed, tearing through the second 100 in just 11.1 sec.” While still regaining composure, Naser said, “I still can’t believe the time.” “When I saw it, I went completely crazy. I was training so hard but I never expected to run this fast.”

They pushed me to get this time

According to her, what made her achieve her best was her opponents. “Running with these amazing ladies, I don’t think I would have done it alone. Against Shaunae especially, I always run for the best because she is a strong athlete. They pushed me to get this time,” she told telegraph. Naser, who switched to Bahrain aged 16, played coy as to whether she considered her time in Doha the fastest clean one in history. “You tell me,” she said.

But for Olympic champion and former world record holder over 400m, Michael Johnson, like to view differently. Stunned by Naser’s performance, he told Telegraph how any runner over one lap usually needs to back off the pace at some stage to save up for the finish. “Naser, however, sustained her effort from the gun, recording 100m splits of 12.1, 11.1, 11.9, before fading in the dying stages in 13.1.”

“I wasn’t really looking to see if someone was beside me,” Naser said. “I was pushing so hard to the finish, it was only on replay that I saw Shaunae. Once I used to chase her, now I was being chased. It’s amazing. Back in Bahrain, children will now look up to me.”

But for Naser to reach this point in her career, it was a long journey starting with that freakish accident weakening her left ankle at the age of six. “I had bought an ice cream but had forgotten my change and as I ran across the road to retrieve it, that’s when the car hit me,” she told IAAF last year. In 2016, the old injury haunted her once again when she twisted her ankle just a week before the Olympic Games in Rio.

Naser was determined to compete and ignored the doctor’s advice. “I was given ultrasound and advised not to compete, but this was my first Olympics and I wanted to race,” explains Naser, who went on to set a lifetime best in Rio. Describing her trauma afterwards, in a talk with News 18, she said: “I cried all night and I remember my mum had to say some nice and sweet words to make me feel better.”

“Thankfully, it did not take too long for me to recover from the disappointment.” All those efforts have paid off. Nasser recorded seven sub-50- second clockings in 2018, IAAF says. The last woman to record that many within one season was Sanya Richards-Ross in 2009. Her highlight of 2018 was running an Asian record of 49.08. “After the race, I didn’t even know my time,” she says. “The people in doping control told me. That 49.08 was the coolest thing that happened to me this year,” she told IAAF. 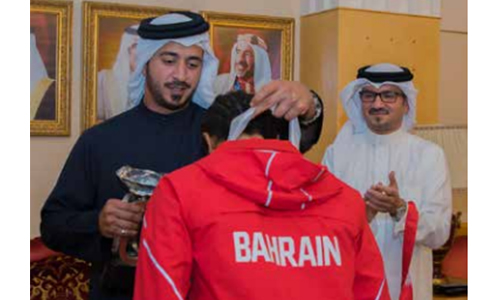 Naser along with Bahrain’s National Athletics team members was given a hero’s welcome on their return from the IAAF World Athletics Championships 2019 gaining a historic first-place at the Arab level, second at the Asian level and 12th overall. HH Shaikh Khalid bin Hamad Al Khalifa, Deputy President of the Supreme Council for Youth and Sports and President of Bahrain Olympic Committee described the performance of Salwa as ‘incredible’.

Shaikh Khalid also praised the displays of Rose Chelimo who won the silver medal in the women’s marathon race as well as the relay team after bagging the bronze medal in the mixed 4 X 400 race. “We are proud of the achievements of our champions. It was an epic event and they mirrored the perfect image for the Kingdom’s athletics,” HH Shaikh Khalid said.