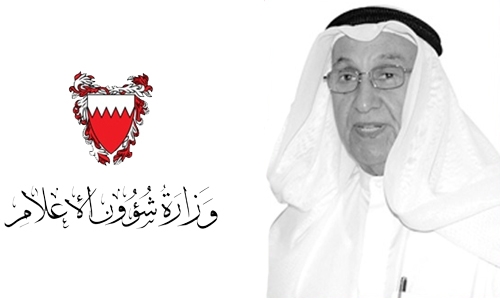 The Minister of Information Affairs, Ali Al Romaihi expressed sincerest condolences over the demise of veteran journalist Ali Sayar who passed away. The minister said he was a great contributor to the political, literary, intellectual, cultural and media fields. He stressed that the Bahraini and GCC press and cultural community has lost one of its pioneers who had contributed with his writings and national opinions, since the fifties, to serving the homeland as well as the Arab and Islamic nation.

He also pointed out Mr Sayar’s contribution to preserving the Kingdom’s cultural and civilisational identity by setting up and becoming the Editor-in-Chief of many local newspapers like “Al Qafela”, “Al Watan” and “Sada Al Osboo”. Late Ali Sayar was also an active writer in “Akhbar Al Khaleej” and many other Bahraini and Arab newspapers and magazines.

The Information Minister expressed appreciation of the ministry’s printing and documentation of Ali Sayar’s biography as part of “Pioneers of Bahrain Press” series. The biography, written by late researcher Khalid Al Bassem, cast light on the deceased’s life, honourable national history and main articles and publications which confirmed keenness on national unity, security and advancement.

This sense of Arab nationalism has earned late Ali Sayar respect of many local and Arab media and cultural establishments. He was also granted the Pioneers Award and the honorary membership of Bahrain Journalists Association.