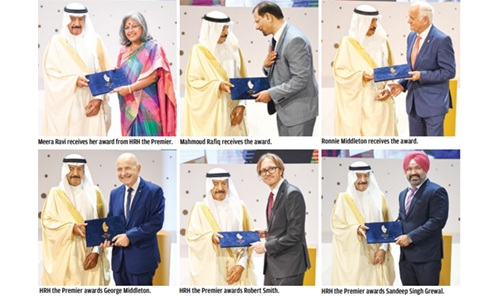 His Royal Highness Prime Minister Prince Khalifa bin Salman Al Khalifa has praised the contributions of the National Press to enhancing the Kingdom’s development and progress march, through successive generations of journalists and columnists who assumed their responsibility and participated wholeheartedly and dedicatedly in the service of the nation. HRH Premier stressed that the press and media play a pivotal role in the development process, highlighting the importance of the awareness-raising and enlightenment efforts of press and media in mobilising the community’s efforts towards constructive participation in the nation-building and progress march, as well as in strengthening the pillars of stability and security.

“Our keenness to honour the press personnel every year is a well-deserved appreciation for their significant national contributions and outstanding efforts in the service of journalism,” HRH Premier said, adding that the honouring is a “message to every creative person in various sectors that their giving and dedication for the sake for the advancement and progress of the nation are appreciated by all.” HRH the Prime Minister made the statements as he patronised and attended the ceremony held today by the Information Affairs Ministry at the Ritz-Carlton Hotel to honour the winners of the fourth edition of the “Khalifa bin Salman Press Award.”

The Prime Minister congratulated the award winners, affirming that they represent honourable models that reflect the Bahraini press, with its long history of high competence and professionalism, wishing them further success. HRH Premier expressed pride in the professionalism and credibility of the Bahraini press, which, he said, has made it credible and trustworthy in obtaining accurate information and news and presenting high-quality intellectual content that enhances the culture of society and moves it to wider horizons of knowledge.

The Prime Minister saluted the press and the media personnel for their clear hallmarks in establishing the foundations of a distinguished school journalism in the region, and a model that reflects the respect of the noble values of the journalism profession as one of the tools for the progress of societies. HRH Premier underlined the crucial role played by the press and media in the development process, citing their keenness to raise social issues. The Prime Minister recalled with appreciation the contributions of the pioneers of journalistic and media work in the Kingdom, who left clear imprints and became role models for the subsequent promising generations who are on the path to safeguarding their distinguished legacy.

HRH Premier also honoured the personnel of the English newspapers and magazines, in recognition of their contributions to the press and media field in the kingdom. The Prime Minister also honoured the late journalist Lutfi Nasr, columnist Dr Abdulla Al Hawaj, from “Al Bilad” newspaper, columnist Ahmed Jumaa and columnists Adel Al Marzooq for their distinguished press work and publications in various fields of knowledge, as well as efforts to document the progress march the kingdom is witnessing in various fields. HRH Premier wished the press and media personnel every success in carrying out their patriotic mission of defending the nation’s security and stability, as well as supporting its efforts to achieve more progress and prosperity.

A short film highlighting HRH Premier’s support to the press and media community, as well as his unwavering interest in supporting the role of the press in pushing comprehensive development efforts forward, was screened. Information Affairs Minister and Board of Trustees Chairman of the Bahrain Institute for Political Development (BIPD), Ali Al Romaihi, in a statement, extended deepest thanks, appreciation and gratitude to HRH the Prime Minister for patronising the fourth award-distribution ceremony of the “Khalifa bin Salman Press Award”, which coincides this year with the 80th anniversary of the issuance of first Bahraini newspaper.