The unbridled Turks | THE DAILY TRIBUNE | KINGDOM OF BAHRAIN 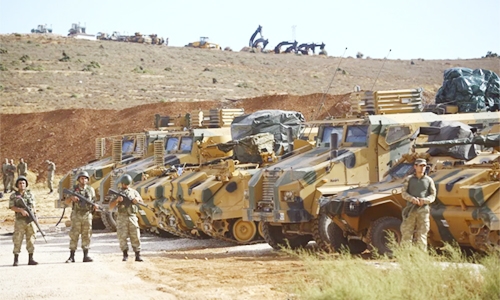 Turkey has boosted its military positions on the border with Syria after saying it is ready for a long-threatened operation that could target Kurdish forces long allied to the US. Dozens of military vehicles were sent to the area following a US troop withdrawal from north-eastern Syria. President Trump defended his move again on Tuesday, saying the Kurds had not been abandoned, calling them “special”. His controversial decision was widely condemned at home and abroad.

Turkey regards the Kurdish militias, which dominate the US-allied Syrian Democratic Forces (SDF), as terrorists, and the US pullout was seen as paving the way for an offensive. Convoys of trucks with armoured personnel carriers and tanks were seen heading to the Turkish border town of Akcakale on Tuesday night. Images of buses carrying personnel were shown by state news agency Anadolu. Mr Trump said his pullout - described as a “stab in the back” by Kurdish forces who helped defeat Islamic State (IS) in Syria - affected “only 50 soldiers” of some 1,000 US troops in the country.

In a series of tweets, Mr Trump softened his tone, praising Turkey as a trade partner and Nato ally, hours after saying he would “destroy and obliterate” its economy if the country went “off limits”. Turkey said Tuesday it was ready for an offensive into northern Syria, while President Donald Trump insisted the United States had not abandoned its Kurdish allies who would be targeted in the assault. Trump has blown hot and cold since a surprise announcement on Sunday that Washington was pulling back 50 to 100 “special operators” from Syria’s northern frontier.