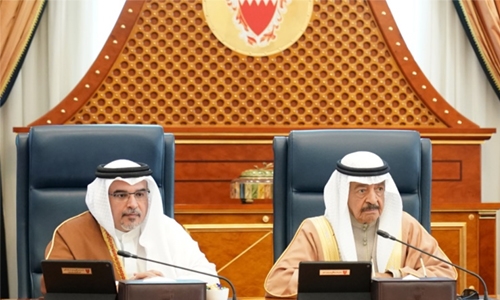 The Cabinet chaired by His Royal Highness Prime Minister Prince Khalifa bin Salman Al Khalifa yesterday in the presence of His Royal Highness Prince Salman bin Hamad Al Khalifa, the Crown Prince, Deputy Supreme Commander and First Deputy Premier, gave directives to expedite getting rid of makeshift classrooms at schools and to replace them by academic buildings. The directive is in line with the government’s keenness to put in place a more suitable environment and venue for learning.

The Ministry of Education and the relevant ministries were requested to submit a comprehensive plan containing proposed alternatives, their implementation schedule and funding. HRH the Prime Minister gave directives to develop the school environment so as to take advantage of school buildings to hold youth and sports activities after the official working hours, according to specific regulations.

The Ministerial Committee for Financial, Economic and Fiscal Balance Affairs was requested to follow up on the matter. Among other things, HRH the Premier gave instructions to rehabilitate law graduates, and to double the number of trainees among them in the Judicial and Legal Studies Institute. The Prime Minister also gave directives to increase the number of trainees among law graduates at the Ministry of Justice, Islamic Affairs and Endowments to ensure their speedy integration in the labour market’s fields that attract them.

As part of its efforts to follow up on the implementation of the directives and resolutions on launching programmes and projects aimed at providing suitable job opportunities for the citizens, the cabinet reviewed the results of the four career expos organised by the Ministry of Labour and Social Development during the first half of 2019.

The expos contributed to the recruitment of 1,225 job-seekers, or 11 per cent of Bahrainis employed by the private sector during the same period, whose number exceeds 11,500, a memorandum presented by the Labour and Social Development in this regard said, adding that a total of 2,600 jobs were offered during the four expos.