Guarding the heritage | THE DAILY TRIBUNE | KINGDOM OF BAHRAIN 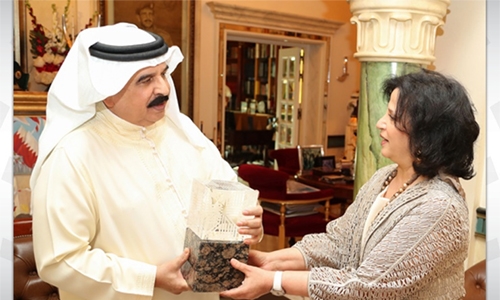 HM the King congratulated all BACA affiliates on the award and commended dedicated efforts to conserve the deep-rooted national heritage and historic monuments in Bahrain, stressing the importance of revamping archaeological buildings and homes and restoring ancient cities which reflect Bahrain’s authentic identity and rich human and civilisational heritage.  BACA President expressed deepest thanks to HM the King, hailing the royal support to preserve the Kingdom’s culture and heritage.

She described the award as the fruit of years-long efforts to restore the old city of Muharraq, highlighting the role of the Shaikh Ibrahim Centre for Culture and Research and the Bahrain Authority for Culture and Antiquities (BACA). She said that the City of Muharraq has gained an international status, with the registration of the Pearl Route project, which is underway, on the UNESCO List of World Heritage Sites in 2012.

She stressed the importance of the award-winning “Revitalisation of Muharraq” project in upgrading infrastructure for citizens living and encouraging the new generation to come back to live and invest in the city.  She updated HM the King on an initiative which will be launched by the authority to mark the National Day and the 20th anniversary of the accession of HM the King to the throne. A grand operetta themed “the 20th Message”, will be staged at the Bahrain National Theatre in December, led by singer Khalid Al Shaikh, who will be accompanied by a group of Bahraini artists.

HM the King hailed the initiative, commending BACA patriotic mission and keenness on participating actively in all national events and enriching cultural life in Bahrain. HM the King wished BACA president and all personnel working in the sector further success.