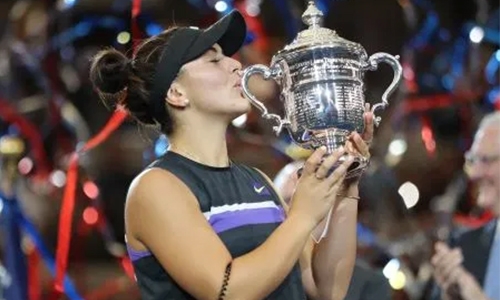 Bianca Andreescu, who beat Serena Williams in the US Open final to become Canada’s first Grand Slam singles champion, was honoured with a rally in her hometown on Sunday. “I am truly blessed,” the beaming 19-year-old told hundreds gathered to celebrate her achievement.

“I did not get here overnight. There has been a lot of hard work and sweat that went into it, a lot of downs, a lot of ups.” Bonnie Crombie, the mayor of Mississauga, a suburb of Toronto, presented Andreescu with a key to the city. Prime Minister Justin Trudeau, in the midst of campaigning for second term, was also on hand.

“She is an inspiration to all Canadians old and young, but to be honest, especially an inspiration to young Canadians because she showed that young people can do anything,” Trudeau said. Andreescu’s stunning 6-3, 7-5 victory at Flushing Meadows denied Williams a record-equalling 24th Grand Slam title.

In the course of a year she has climbed from 200th in the world rankings to a career high fifth. Her rise has been another source of pride for Canadian sports fans, who saw the Toronto Raptors claim the NBA championship in June.