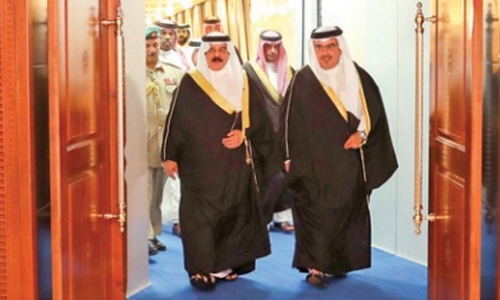 HM King Juan Carlos expressed sincere thanks and appreciation to HM King Hamad for his kind visit and noble feelings, wishing HM the King abundant health and happiness. HM King Hamad also attended the conclusion of the 2019 Ironman 70.3 World Championship, held in the city of Nice, France, with the participation of the Bahrain endurance team, and athletes from various countries.

Upon arrival, HM King Hamad was welcomed by the Mayor of Nice, Christian Estrosi, senior local officials and senior officials from the high organising committee of the 2019 Ironman 70.3 World Championship.  HM the King’s Representative for Charity Work and Youth Affairs and Chairman of the Supreme Council for Youth and Sports, HH Shaikh Nasser bin Hamad Al Khalifa, briefed HM King Hamad on the participation of the Bahrain endurance team in the championship, as well as its preparations for such a world sporting event.

On the occasion, HM the King expressed pleasure at attending the world championship, and lauded the solid good relations of friendship between Bahrain and France, especially in the youth and sports fields. HM King Hamad congratulated Bahrain’s endurance team for winning the first and second places in the 2019 Ironman 70.3 World Championship, praising their strong determination and distinguished levels throughout the event, hailing the numerous world titles attained by Bahrainis at various championships and competitions, citing HH Shaikh Nasser’s winning of the Ironman World Championship 2018 in the US.

HM the King stressed his unwavering keenness to provide all kinds of care and support for Bahraini youth in order to continue achieving successes and maintain the kingdom’s sports accomplishments and gains. HM King Hamad commended the tremendous efforts exerted by HH Shaikh Nasser, and the First Deputy Chairman of the Supreme Council for Youth and Sports and President of the Bahrain Olympic Committee, HH Shaikh Khalid bin Hamad Al Khalifa, to boost the march of sports in Bahrain, diversify games and encourage Bahraini youth in participate in them and lift the national flag at various gatherings.

HM King Hamad praised such world sporting gatherings, noting that they are platforms to strengthen friendship and co-operation among world athletes and youth.