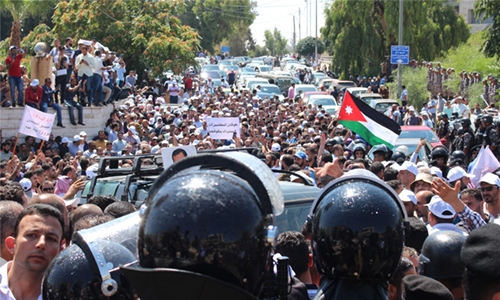 Nearly all state school teachers in Jordan began a strike yesterday, insisting that they will not return to teaching until the government’s promise of a 50 per cent increase is addressed. A statement by the powerful teachers’ union that called for the strike said that “commitment to the strike was nearly 100pc.”

Naser Nawasrah, the union’s vice president, told the press that teachers “will not enter the classrooms until those responsible for transgressions against teachers during Thursday’s protest are held accountable.” Speaking on Radio Al Balad at the end of the first day of the strike, Nawasrah complained the government had not responded to the demands of the teachers.

“We have asked for a long time to have a dialogue but were stonewalled, and then when we protested our teachers were humiliated, beaten and arrested.”  Nawasrah said that there had been no plans for a strike until September, but the harsh government response pushed them to strike.