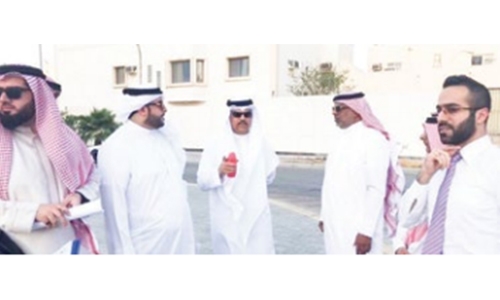 Citizens of the constituency, specialists of the roads and sanitary sectors and the Municipal Co-ordination and Development Unit, accompanied them. This is a part of the Minister of Works, Municipalities Affairs and Urban Planning, Essam Khalaf’s instructions to follow up on the complaints of citizens and suggestions of the different municipal councils and their MPs.

Mr Al Malki and Mr Al Dhaen discussed several complaints and suggestions with Mr Al Khayat that concern roads and sanitary in the area, including building a number of speed bumps in a number of the constituency’s blocks, allocating car parks in front of mosques and schools, among other complaints and suggestions that the Undersecretary instructed the engineers to follow up on for the public good.

Mr Al Malki and Mr Al Dhaen expressed their gratitude and appreciation towards the Undersecretary of the Ministry of Works, Municipalities Affairs and Urban Planning and the ministry’s team of engineers for their constant co-operation and efforts to fulfil the needs of citizens in the constituency.