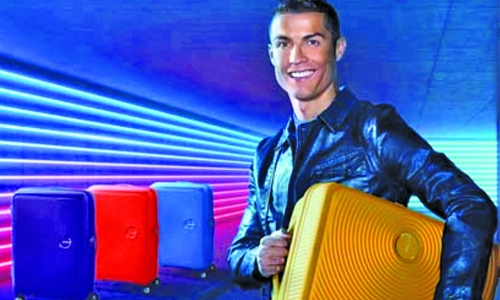 Five-time winner – a world record, and the current holder of the FIFA Ballon d’Or Award (2008, 2013, 2014, 2016, 2017), the former Manchester United (2003-2009) and Real Madrid (2009-present) goal-scoring record-breaker has won 24 trophies over the course of his illustrious career, including four UEFA Champions League titles, and has captained Portugal to victory in the 2016 UEFA European Championship.

His appointment also comes as football fever begins to grip global audiences ahead of the FIFA World Cup, which kicks off in Moscow, Russia on June 14th, 2018.

Expressing his excitement on the signing of Cristiano, Subrata Dutta, President of Asia Pacific at Samsonite, said, “There couldn’t be a better time to bring Cristiano on-board. His lively and vivacious personality, on and off the field, resonates perfectly with our fun-loving, vibrant brand personality. His presence will help bring American Tourister to a whole new audience, allowing us to stand out from the competition, and enabling us to take the Brand to the next level.”

Equally delighted to join the American Tourister family, Cristiano said, “American Tourister is a functional yet cool brand that appeals to everyone. I’m delighted to be the face of the brand for 2018. As a frequent traveler myself, I appreciate the need for high quality luggage that still allows you to express your personality.”

Speaking on the association, Syed Shaheen Jamil, Business Head for Middle East, Africa, CIS and SAARC countries, said “Cristiano Ronaldo is arguably the most popular football star in our region. We hope to leverage his popularity, in a football-crazy region, especially when the FIFA World Cup is just around the corner, to strengthen our brand’s connection with all his fans.”