Experts for regulation of cryptocurrencies | THE DAILY TRIBUNE | KINGDOM OF BAHRAIN 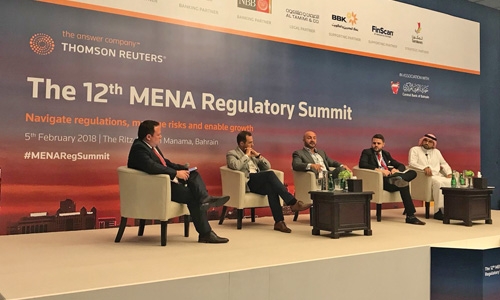 Experts for regulation of cryptocurrencies

Manama : Adoption and regulation of fintech, blockchain and cryptocurrencies was one of the hot topics discussed at the MENA Regulatory Summit held yesterday.

While development in finetch, blockchain and cryptocurrency technologies accelerate, nations will need to be prepared to add regulations, according to most participants of the 12th edition of MENA Regulatory Summit held yesterday.

A quick survey at the event revealed that most participants are in favour of regulations.

To the question “What should financial service regulators do about cryptocurrency initial coin offerings?”, 73 per cent responded with “Regulate them as any other financial services product”.

12pc favoured “Leave them as unregulated, but issue warning to potential consumers”, 8pc said “Ban the sale and distribution outright”, 5pc responded with “Ban the sale and distribution to retain customers”, and 2pc responded with “leave them as unregulated and say nothing”. Regulations in cryptocurrency has been a hot topic around the world with many nations voicing concerns about it in recent weeks.

To the statement “digital money will soon replace paper money”  45pc responded with “agree”, 40pc disagreed and 15pc were neutral.

“Every time I attend a conference with the financial sector, I find myself speaking about basic issues of corporate governance related to ethics, trust, integrity and compliance. These are essential elements for a safe and sound operating environment even after tightening of rules and enhanced regulatory engagement across the board. What does recent history tell us about the cost of non-compliance? The global financial crisis of 2008 and its aftermath amply prove that if we ignore compliance we get into serious trouble.

According to some estimates since the 2008 crisis, the global banks have paid over US$ 250 billion in fines and penalties. Just the top ten offenders have paid about US$ 180 billion. It is clearly the failure of the leadership that did not comply with rules, regulations and basic business ethics,” said Al Maraj.

“The cost of non-compliance is not just monetary; it is also economic and social. The global banks have had to make major strategic organizational and governance changes in the last ten years. Hundreds of thousands of employees lost their jobs. Banks had to re-strategize their businesses, often resulting in withdrawing from certain markets and business segments in order to de-risk the business and to focus on their core markets. In fact, de-risking, which has created its own issues of non-inclusiveness, is a result of a failure in compliance,” he added.