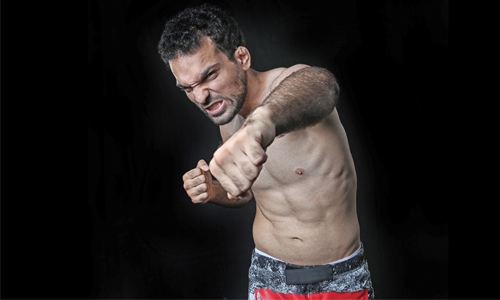 Manama : Youth icon of Bahrain and Mixed Martial Arts sensation Hamza Kooheji has announced that he will make his return at Brave 9: The Kingdom of Champions. With days to go for the announcement of the fight card, Hamza had been featured in the theatrical trailer of Brave International Combat Week which was showcased across multiplexes across Bahrain.

Ending much speculation, Hamza Kooheji had announced that he will make his return to Brave Combat Federation and thanked HH Shaikh Khalid bin Hamad Al-Khalifa, First Deputy President of the Supreme Council for Youth and Sports and Honorary President of Bahrain Sports Federation for Disabilities for making an impact in the MMA world that opened opportunities for athletes from the Gulf Cooperation Council to compete at the highest level. Hamza is a part of the elite team – KHK MMA Fight Team which is based in Bahrain and features the best fighters around the world.

Though the details of his opponent has not been revealed, Hamza Kooheji had stated, “I am representing KHK MMA Fight Team, which provided me every opportunity to train and excel. I am not bothered about my opponent, I will emerge victorious and that is the certain.”

BIC all set for maiden Open Track of new season